Skip to content
Aaaaand I am back
A place I had been longing to try for quite some time now is the Rice Boat on Newnham Road.
Described by their website as “Indian food, but not as you know it”. The Rice Boat is not like the usual standard of British Indian cuisine you find in Cambridge, but more of a traditional Keralan style of Indian food.
Popular for its king fish and craft beer selection, you can see why this place is often spoken so highly of when reading any Indian cooking review or blog. Sadly for me I have never been on this side of town to give it a go, so tonight, i thought I would finally change that!
Located right next to the Mill Pond and the beautiful Granta pub, this area can be a night out in itself. Also sitting next door is one of my favourite Indians in the area, India House, which always gets high marks every time I visit. Luckily they arent rivals as they take two very different approaches to Indian cuisine. 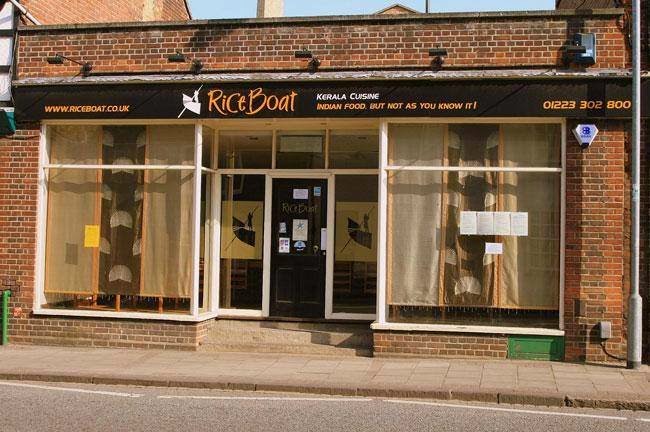 The first thing I notice about the Rice Boat is how easy it is to miss. Its not very big or imposing like India House, or the Granda Pub, which both stand out so much. In fact, the Rice Boat could easily be mistaken for a small shop while walking past.
Once you walk in you are greeted by warm atmosphere. The walls are orange/yellow and there is lots of Indian art work. The place has numerous books about Kerala and south India to help customers get a feel of the place they are about to experience through food.
I was the first to turn up out of the four of us meeting here. The two staff looked quite busy despite there not being too many people in there at the time. Even though I made a booking for a table they had no record of me coming. Luckily they managed to find us a spare table anyway and put us at the front of the bar.
While waiting for my friends to turn up I took a look at some of the books about Kerala and also examined the menu. The thing which first jumped out at me was the prices, the Rice Boat is by no means cheap in any sense of the word. Now I understand that some of these dishes are made from scratch, are specialist foods and are made to the highest standards, but even things like a 660ml (just over a pint) bottle of Cobra was £6.50. Something you could get from a supermarket around the corner for £2, I dont see why this had to be the same price as the food.
Once my friends arrived they all agreed that the prices were certainly above average but were impressed by the selection of cuisine on the menu. One of us in particular liked the selection of numerous craft beers and ale available. Personally I think a lot of Indian restaurants are probably better just letting you bring your own alcohol in, its cheaper and you can chose exactly what you like, however it was good to have a selection of beers to try and sample which I may not have tried otherwise.
I was pleased to see a Czech beer on the menu called Konrad, which was one of the more cheaper beers at around £4.50 a pint. Sadly they were out, so I had to settle for an Aspal Cider.
Once we had made our orders we decided to discuss what we had chosen. One of my friends ordered the Kerala Red Fish Curry with Onion Vada for starters.
My other friends ordered the Kerala Chicken Curry and a the other a BIRYANI. I myself ordered a starter and went for the Fried Tiger King Prawns and then a Lamb Ularthu for mains.
As a group we ordered a good mix of everything so we got a good idea of what the Rice Boat is all about. 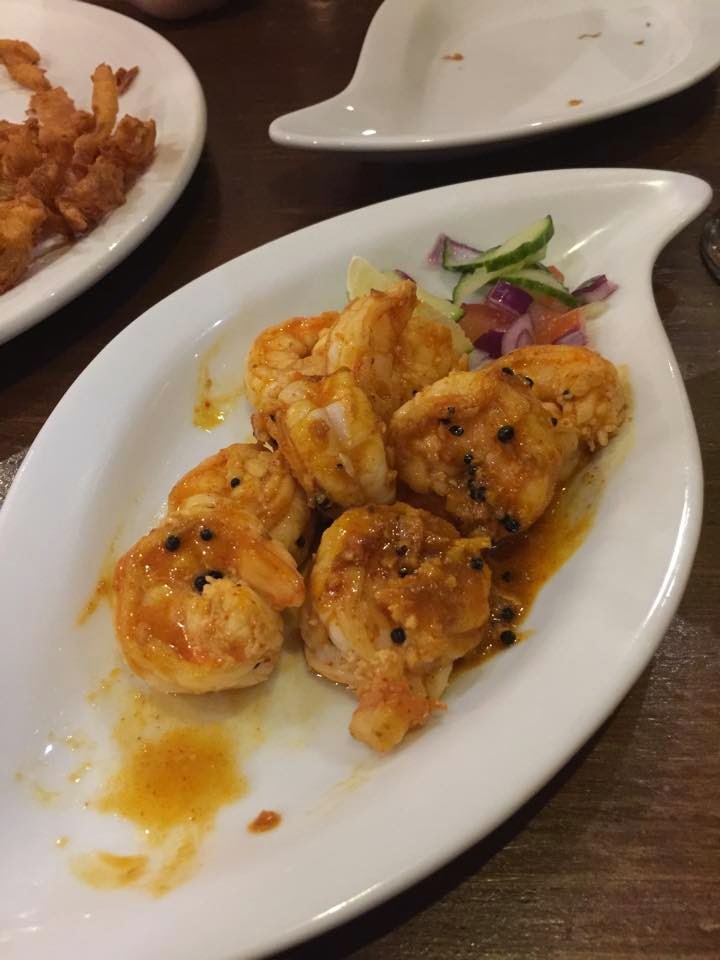 Our starters came out while we waited for our mains. My tiger king prawns were out of this world. They were so big, juicy and full of flavour.The mustard seeds and chili really blew me away too as they had a mild kick to them. I would go as far as to say that they were the best prawns I have ever had in my life. Easily worth the £9. 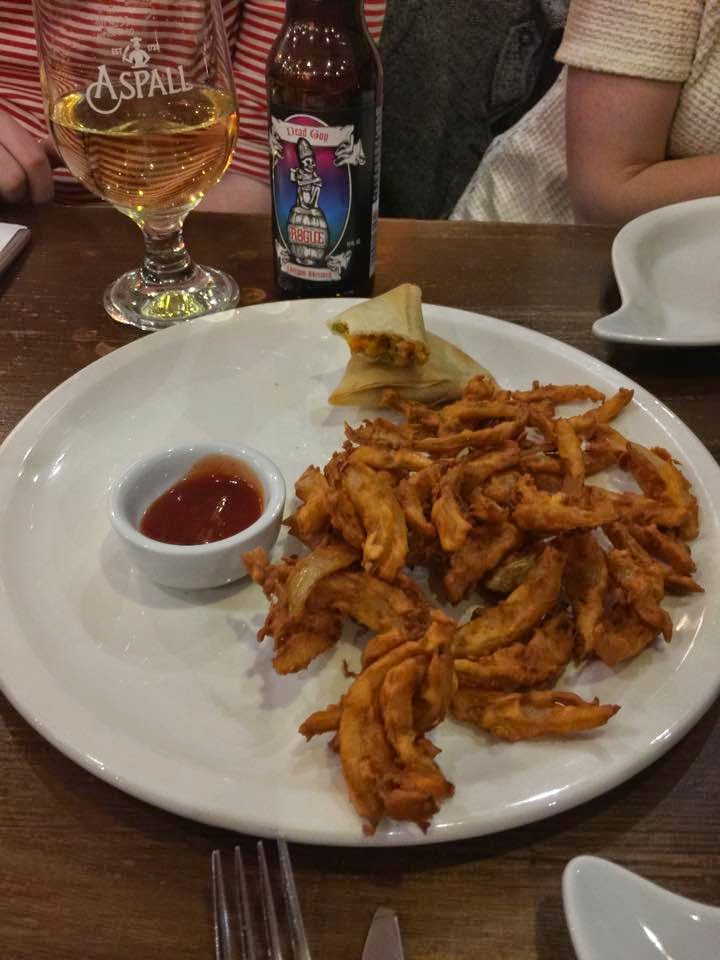 My friends Onion Vada arrived at the same time as the prawns. Basically Kerala’s version of Onion Bhaji (but a whopping £4.50). It was a nice snack to enjoy while waiting for our food. The sauce was a nice touch and had a good kick to it. A great sharing platter.
We ended up waiting a little while for our food, nothing which bothered any of us. The staff were quite busy when I came in to a half empty restaurant, by this point the place was full, so my sympathies were with them.
My friends Biriyani come out with two eggs, some poppadoms and a pickle. This dish comes across as the better value of the dishes as it seems to have a more complete set… 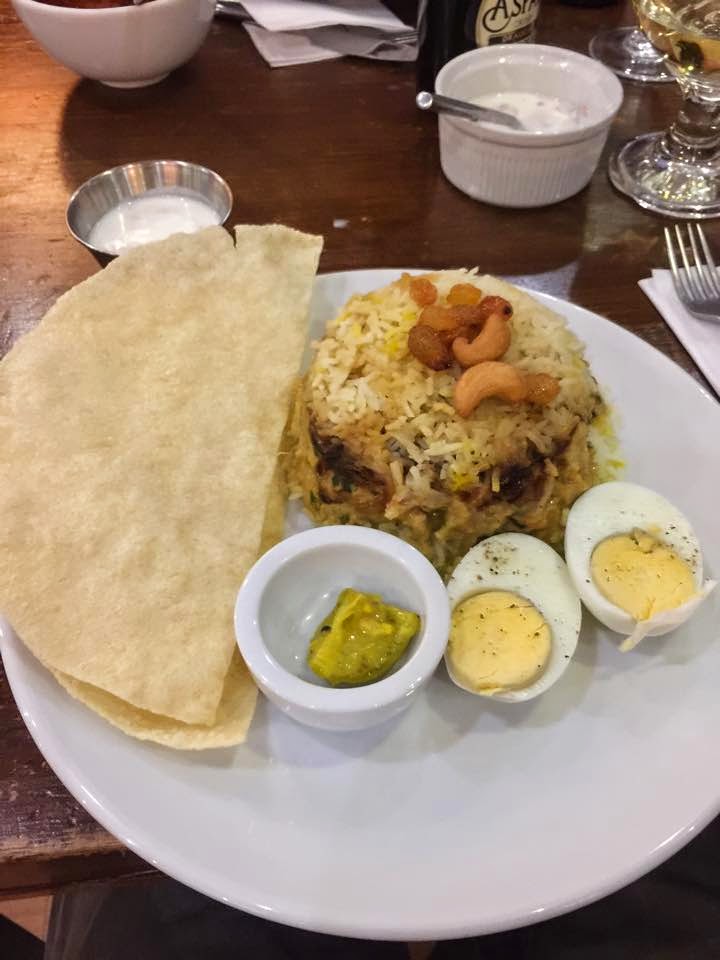 …As you can see by my Lamb Ularth, it looks quite lonely on the plate. 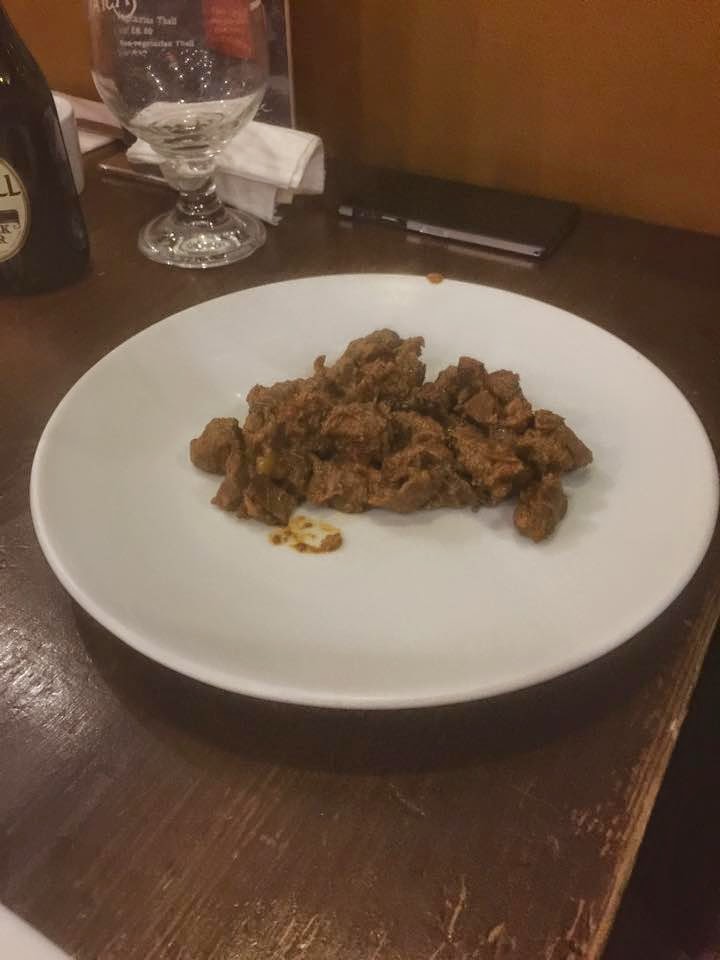 Dont let that fool you mind, this Lamb was absolutely incredible. I just wish I had gotten a little more for £11. The lamb is slow cooked until it soaks up the sauce so the taste is unbelievable when you take a bite with such intense flavour. 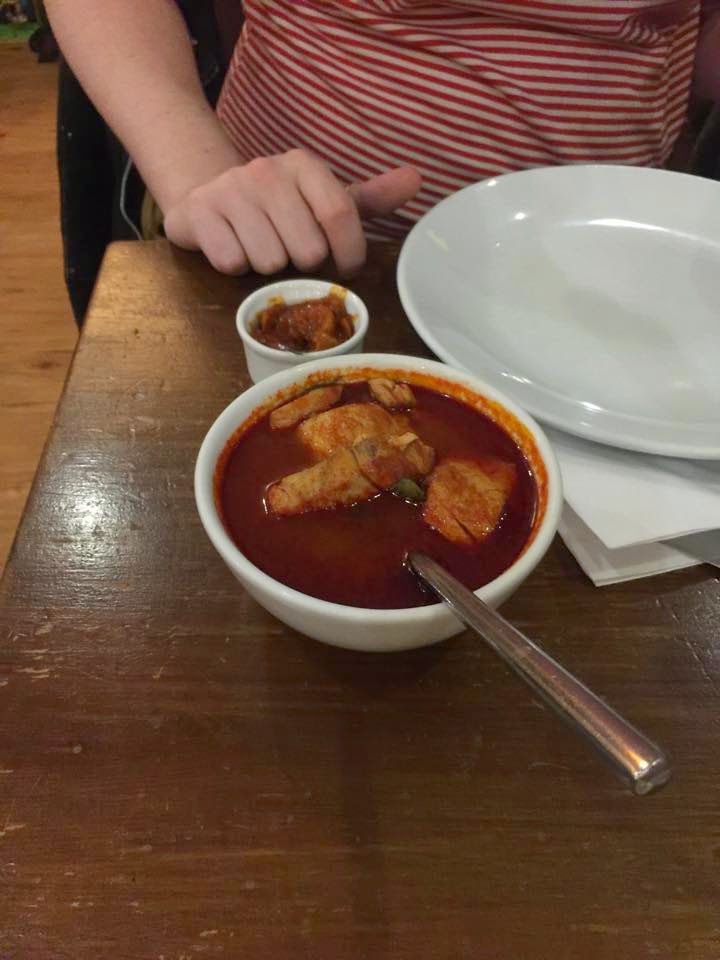 My friends fish curry for me was the star of the show. Not only because it was the only dish which had a spicy kick to it (which for me is a big deal), but also the huge chunks of King Fish looked delicious. This will defiantly be what I will be ordering should I come here again! I managed to sample the sauce were tasted sublime, and the dish received two thumbs up by my friend. 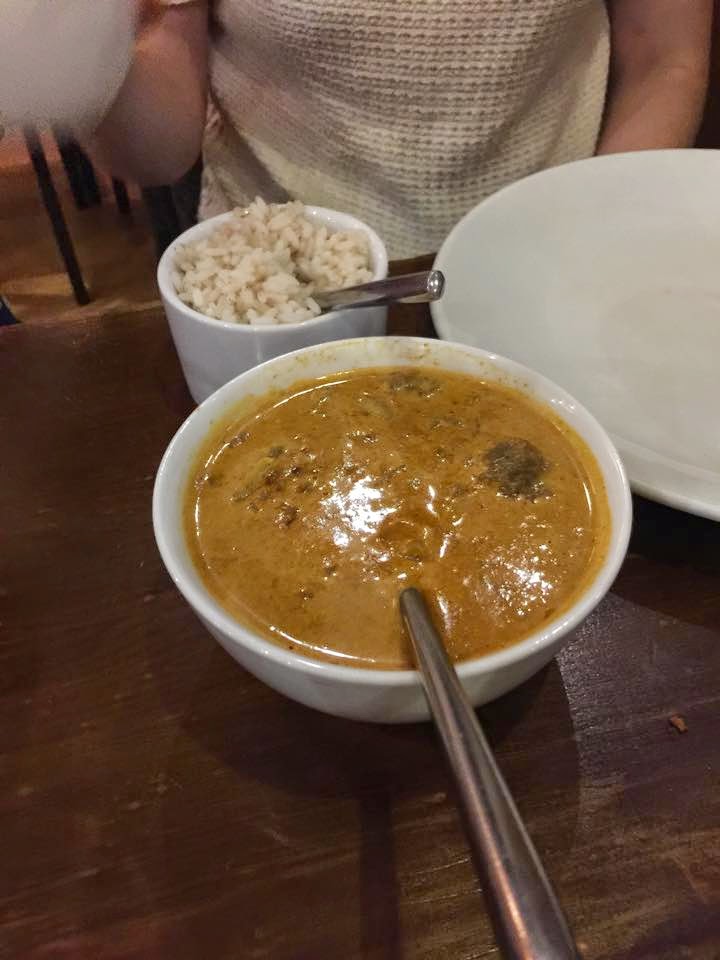 The chicken curry was equally nice in terms of flavour, you could really taste the cardamom, cloves and cinnamon in there. Boasted as the spiciest chicken curry on the menu the dish didnt really have much of a kick to it but the flavour was great and went down a treat. It reminded me a  mix between a traditional Indian and a Thai curry because of the coconut milk. 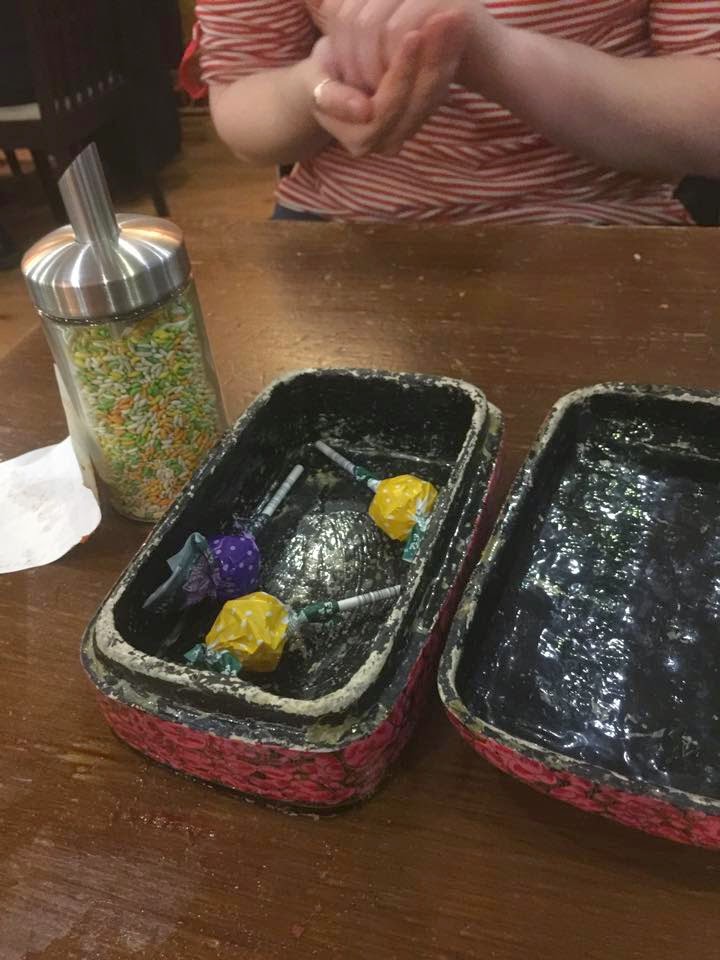 We were presented with the bill in a what I would presume is a Keralan style box which came with some lolipops and anniseed sprinkles (for some reason!?). No hot towels or chocolates at this restaurant I am afraid.
My bill came to about £25, which was expected.
I couldnt help but think that £25 is usually the standard price for two people at a lot of Indian restaurants around Cambridge. You would get more for your money too and never leave feeling like you could eat more. You pay for quality I suppose!
That being said, we experienced something which can only be found at one other place in Cambridge (that I have yet to try), and every single dish we ordered was incredible and well presented. I am so glad I made the effort to try the Rice Boat, though thanks to its awkward location (for me) and its high prices I cannot see myself coming back here for a while. Though I am left with a pleasant memory and an education on real Indian food and culture.
This is a place which I recommend to everyone if they enjoy Indian food in any shape or form. This is the authentic South Indian food experience. Just be prepared to spend a little more, though I am confident you will not be disappointed by any of the dishes. My other only warning is towards people with a big appetite like me, you may come out feeling a little hungry later.
4/5 – A unique selection of fantastically prepared south Indian cuisine. Just be prepared to pay for quality.