Its been over four years since the Cambridge Curry Crews first ever event back at The Curry Queen in 2010. Not only that but it was our 20th event coming up too so for this occasion I had to plan somewhere particularly special and of the highest quality to celebrate.
Not many places spring to mind when thinking about a place which serves fantastic Indian cuisine as well as being consistent with it. In the end we had no choice but to go for The Tamarind in Teversham. Not only does this place tick all the boxes but I have never heard a bad experience about it!
From the outside the building is beautiful, an old school if I am not mistaken, but inside a very sleek modern interior, so quite contrast in itself.
The disabled access is fantastic, the food never disappoints and the service never gets any complaints. 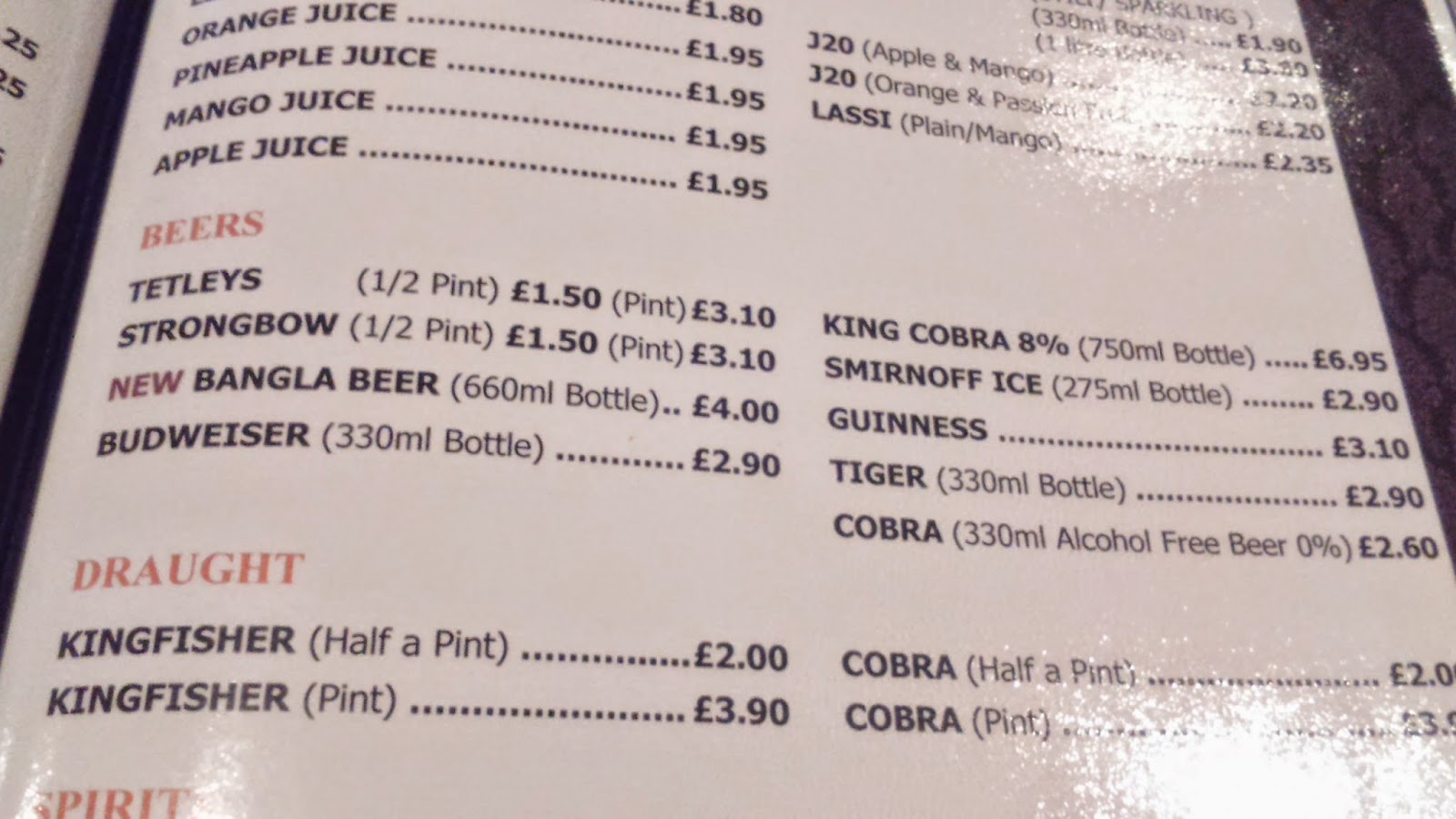 One thing I love about The Tamarind is the reasonable price for the quality you receive. The amount of times I have walked in forgetting that and expecting an expensive bill at then end, to only be left pleasantly surprised after.  Granted the beer is a little steep here, but that is a sad pattern I am starting to see in all Indian restaurants. 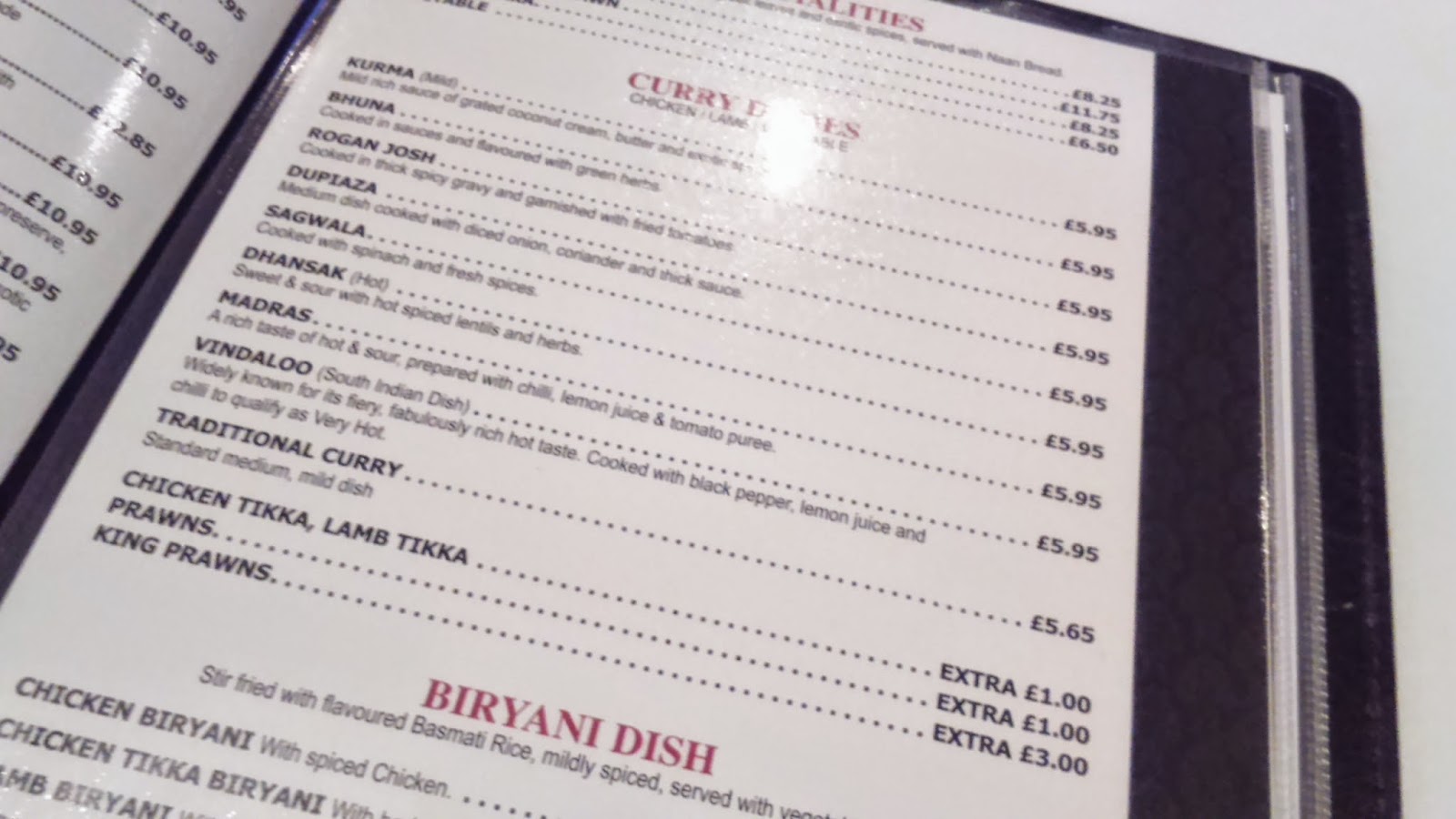 The selection of food is here good. There is even a very small English menu for people who are dragged here against their will. They have a selection of fish and Biriyani’s on the menu too. They also offer a buffet service on Sundays for anyone in that kinda thing.
As my girlfriend and I were hosting this event we got there a little early and waited for people to turn up. We looked at the menu decided what we wanted. The tables around us were filling up quite quickly being a Saturday night and all, which is always a reassuring sign of a places reputation.
I decided to go for a Kingfisher beer and had some papadums. The staff brought them out quite promptly and presented the sauces in white china pots. They only gave us three sauces instead of the usual four you’d expect in most establishments, mango chutney, yoghurt and onion salad. I had to order the lime pickle separately, which wasn’t a problem for them.
All four sauces were absolutely fantastic and were prepared without fault. The only quarrel I had was with the portion sizes. We ran out of mango chutney and lime pickle twice.  Over all we were all very satisfied with it. 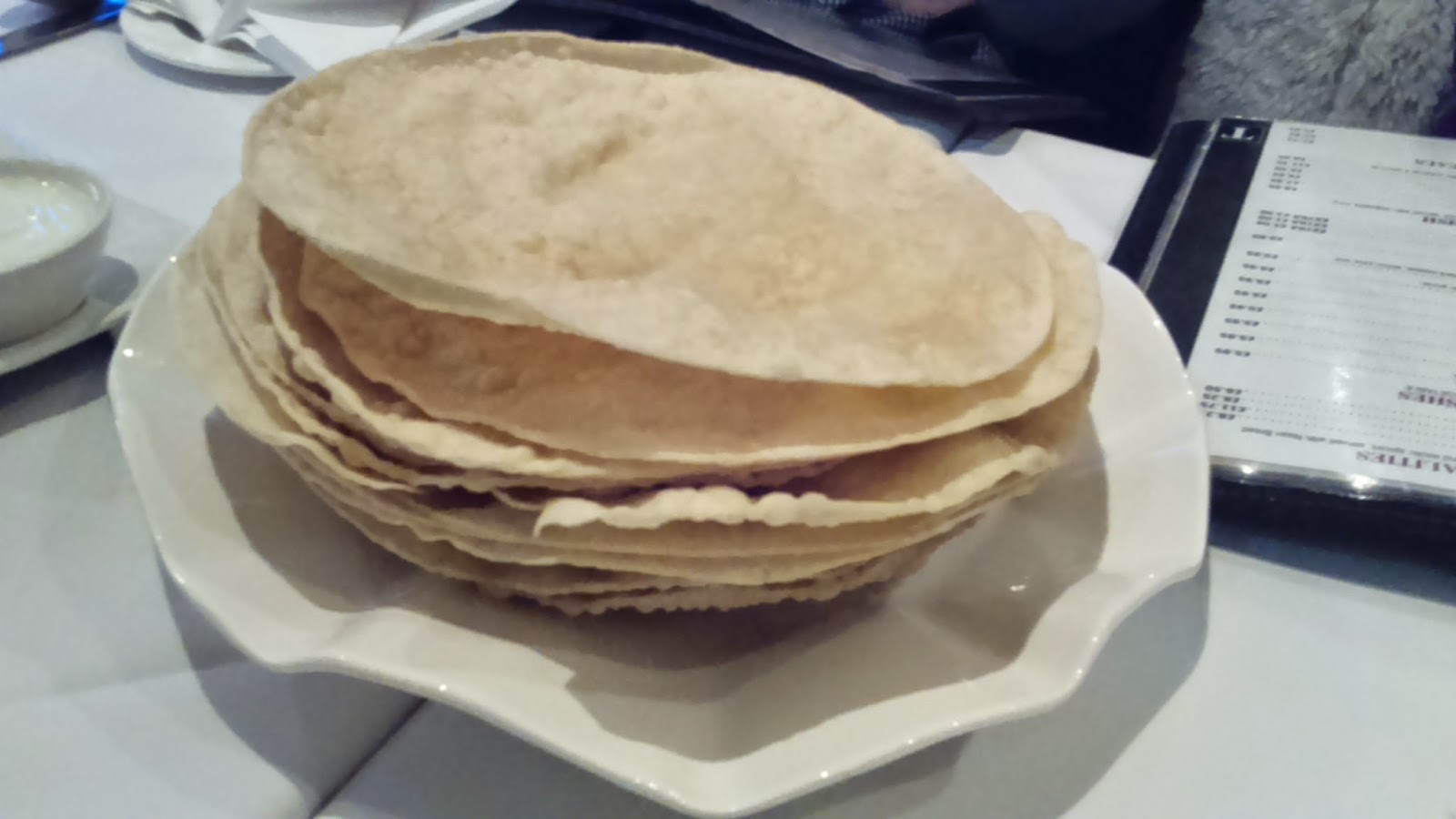 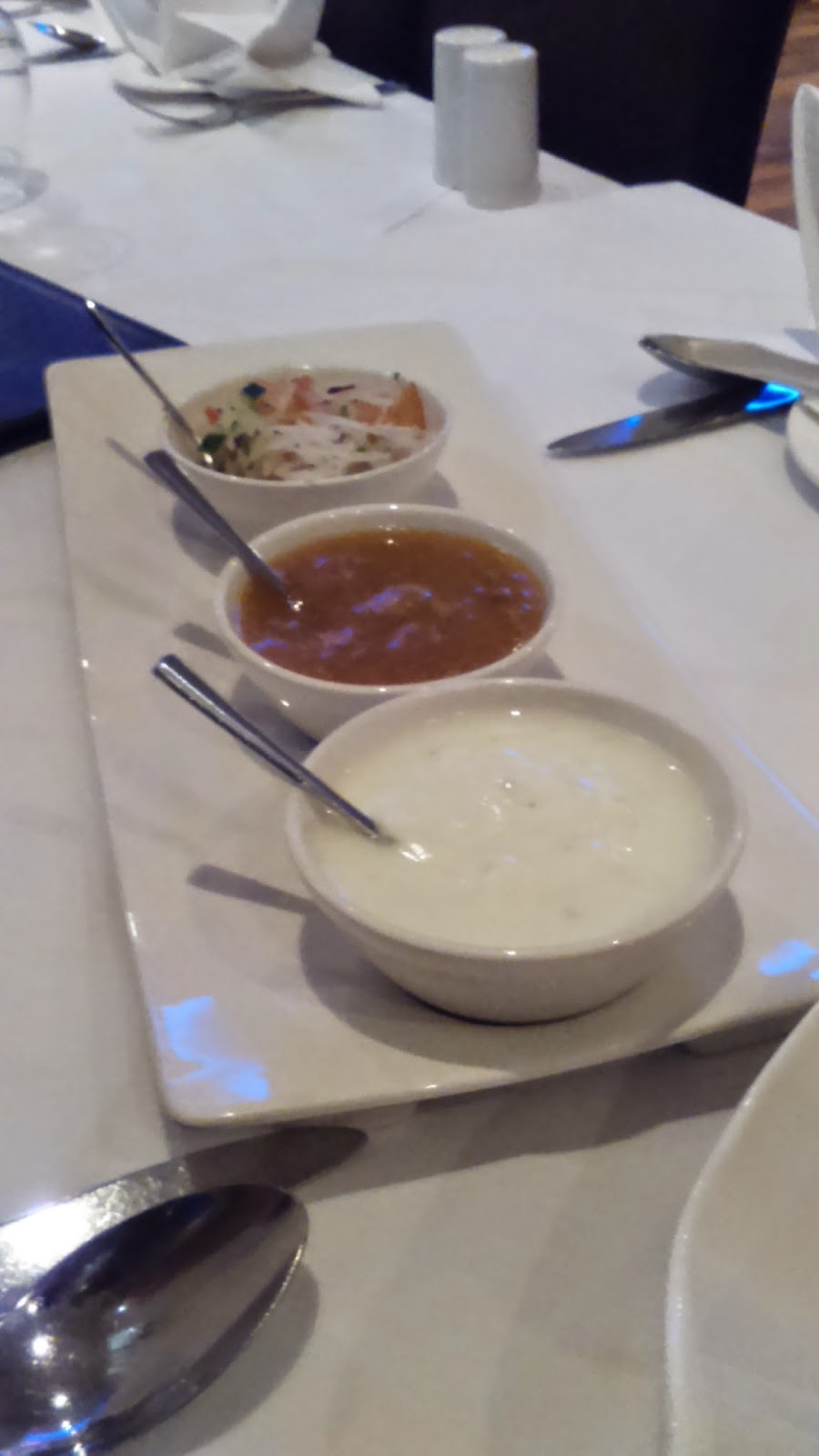 Once we were finished and everyone had turned up we decided to make the order. I was in a particular mood that evening so went for the old slop-in-a-bucket, and had a chicken tikka vindaloo with saag aloo. Some of us also ordered some tikka’d salmon and a leg of lamb.
While we waited we chatted and took in the general atmosphere of the establishment. I have been here before and you can read my other review here. The place has a very modern feel to it. It is very open, light and has lots of warm, modern art work on the walls. A complete contrast to the old school building on the outside.
The place had started to pack out a bit now and was bustling with life and noise.
The food came out with reasonable pace. Everything looked fantastic and was presented incredibly well. 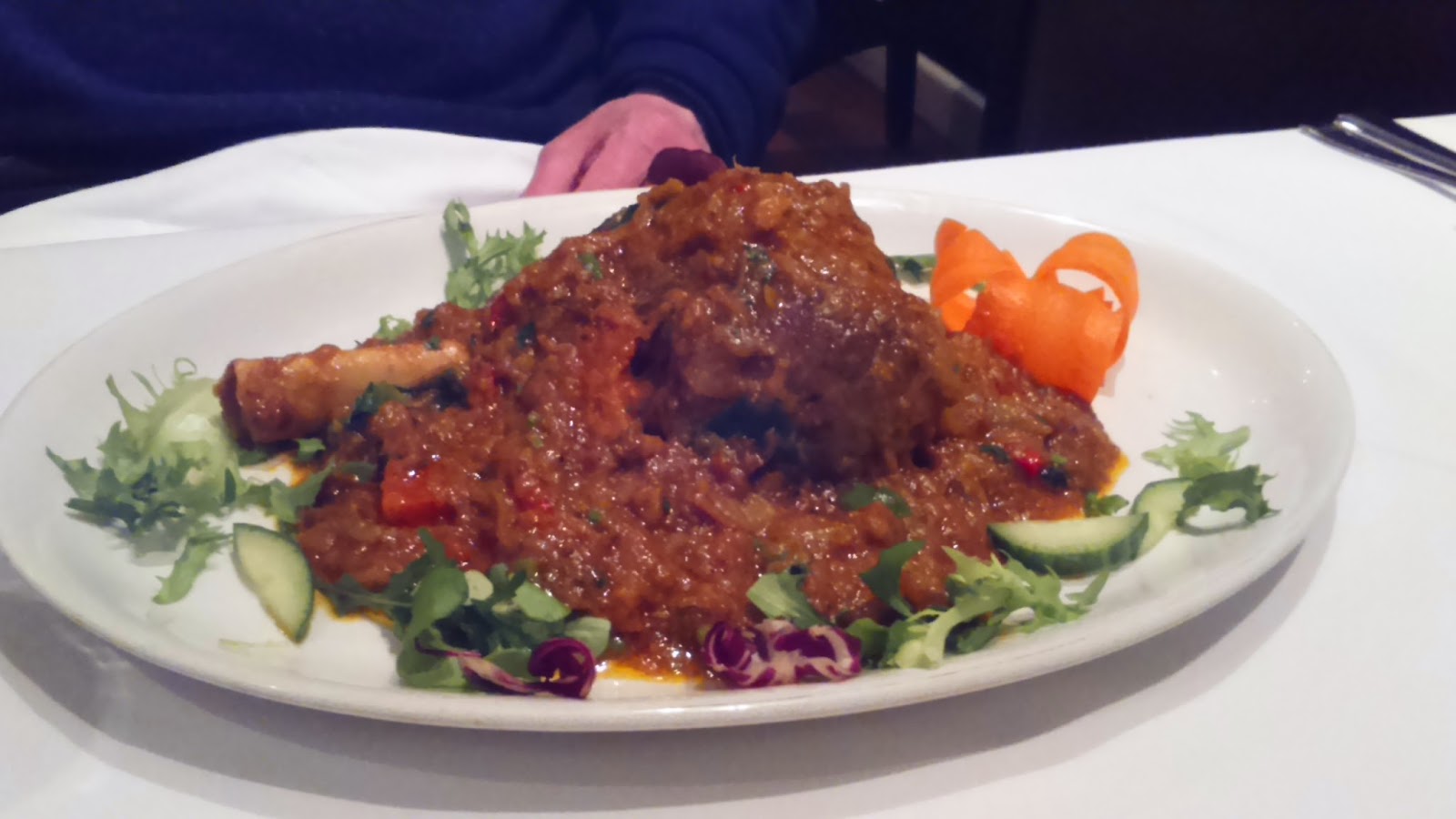 The lamb looked absolutely sublime. I gotta give Paul credit for this order. It was mouth watering! 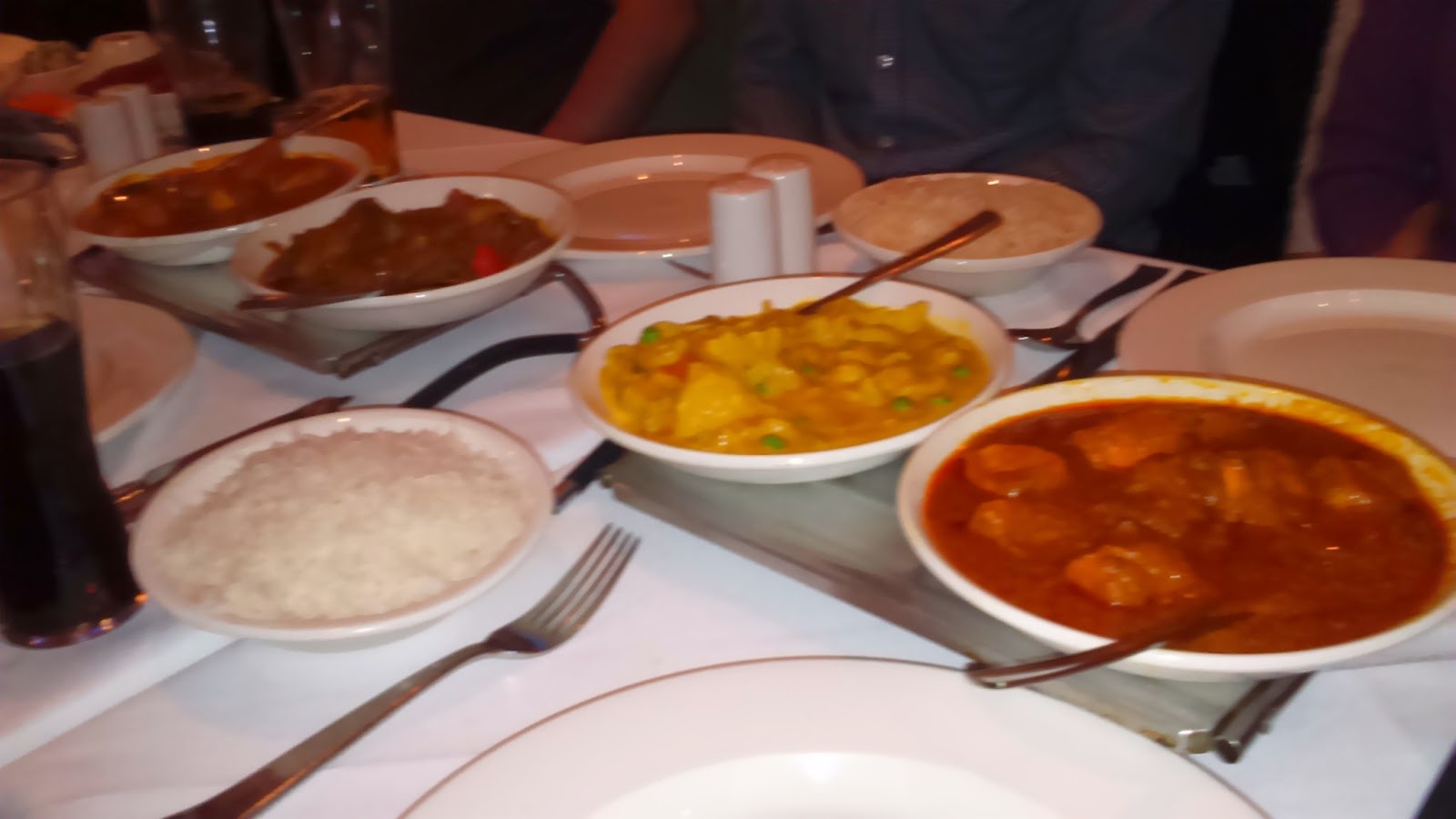 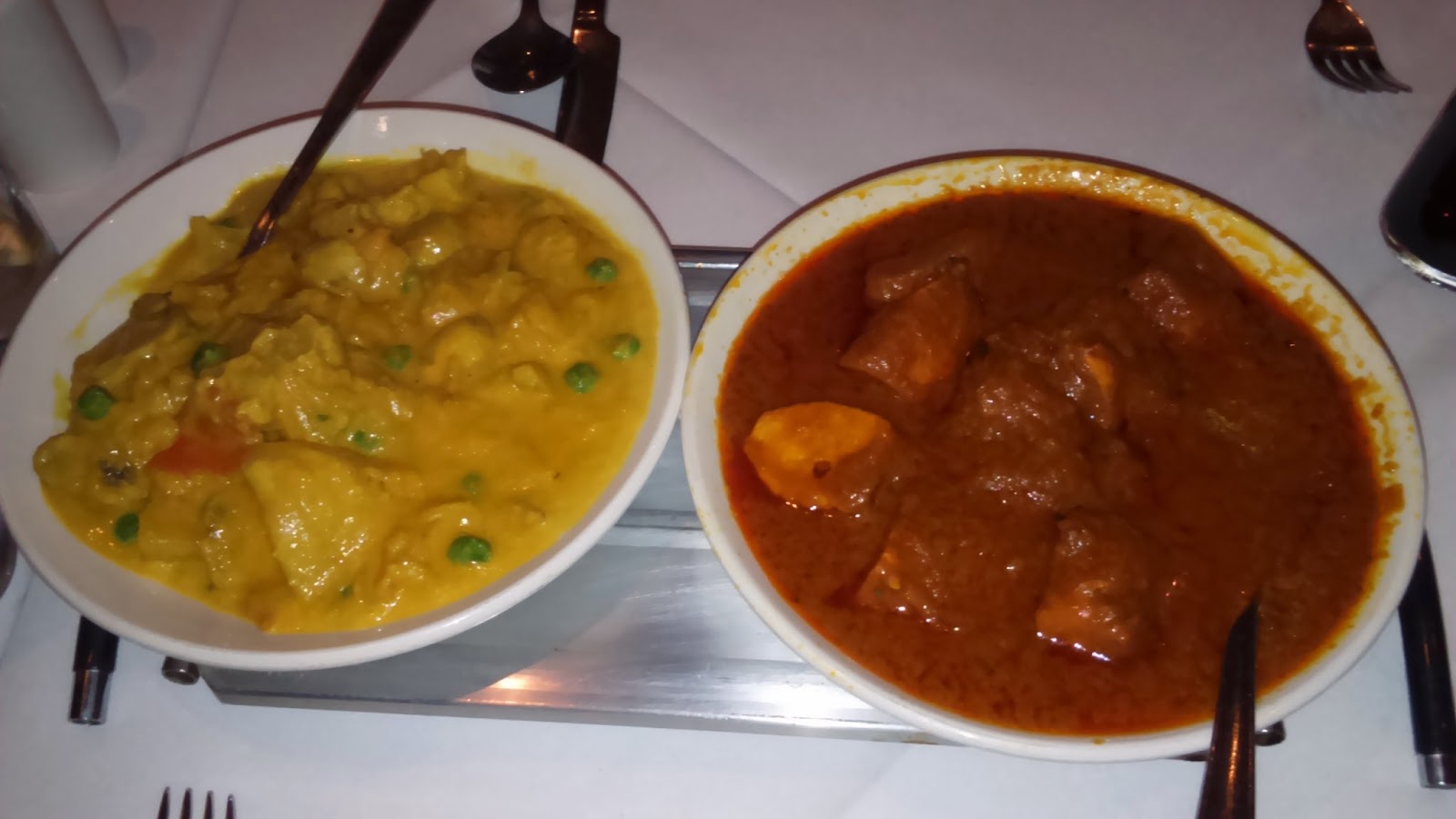 Chicken korma and chicken tikka vindaloo.
The portions were all generous, even the rice. The chicken was all in large chunks and looked like they had been tikka’d properly. I am finding a lot of places now days are simply sticking a hole through the chicken and saying its tikka’d (well, thats how it feels anyway!). I would also like to add that to have the meat tikka’d here is only an extra £1. So it is competitive and well done as some places charge £2!
My vindaloo had a real kick to it. Myabe it was the fact I hadnt had a hot curry in a few weeks but my face went bright red. Just how it should be! The curry also had a bold, smokey and flavoursome taste it to and a marvellous texture. I was very happy with my meal!
The staff asked us if we were happy with everything, as we were and left us too it.
When we were finished we were shown a little magic. We were presented with 8 little white tablets which appeared entirely innocent. The gentleman serving us then poured hot water over them and we watched in awe as they expanded in to hot towels. 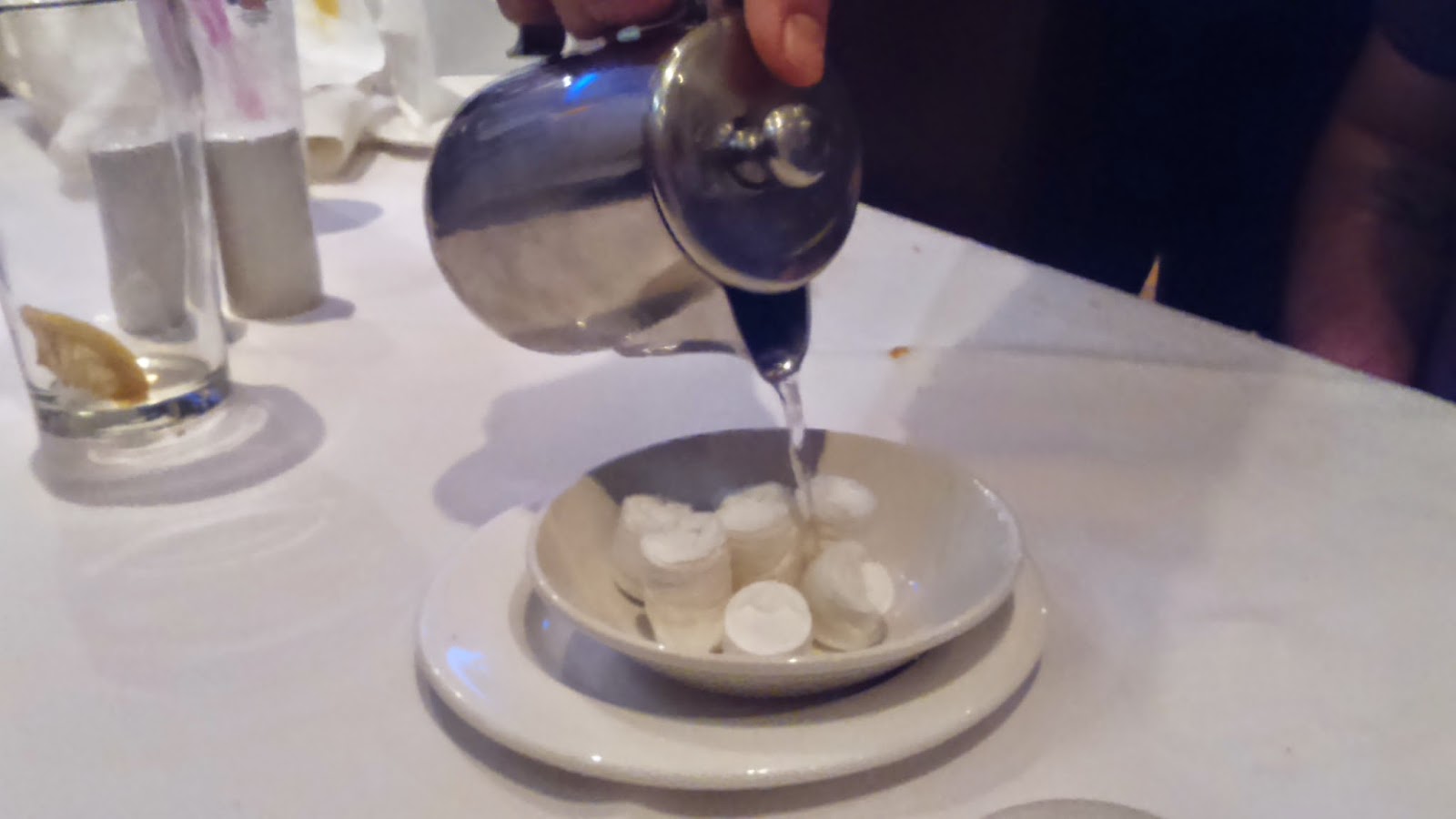 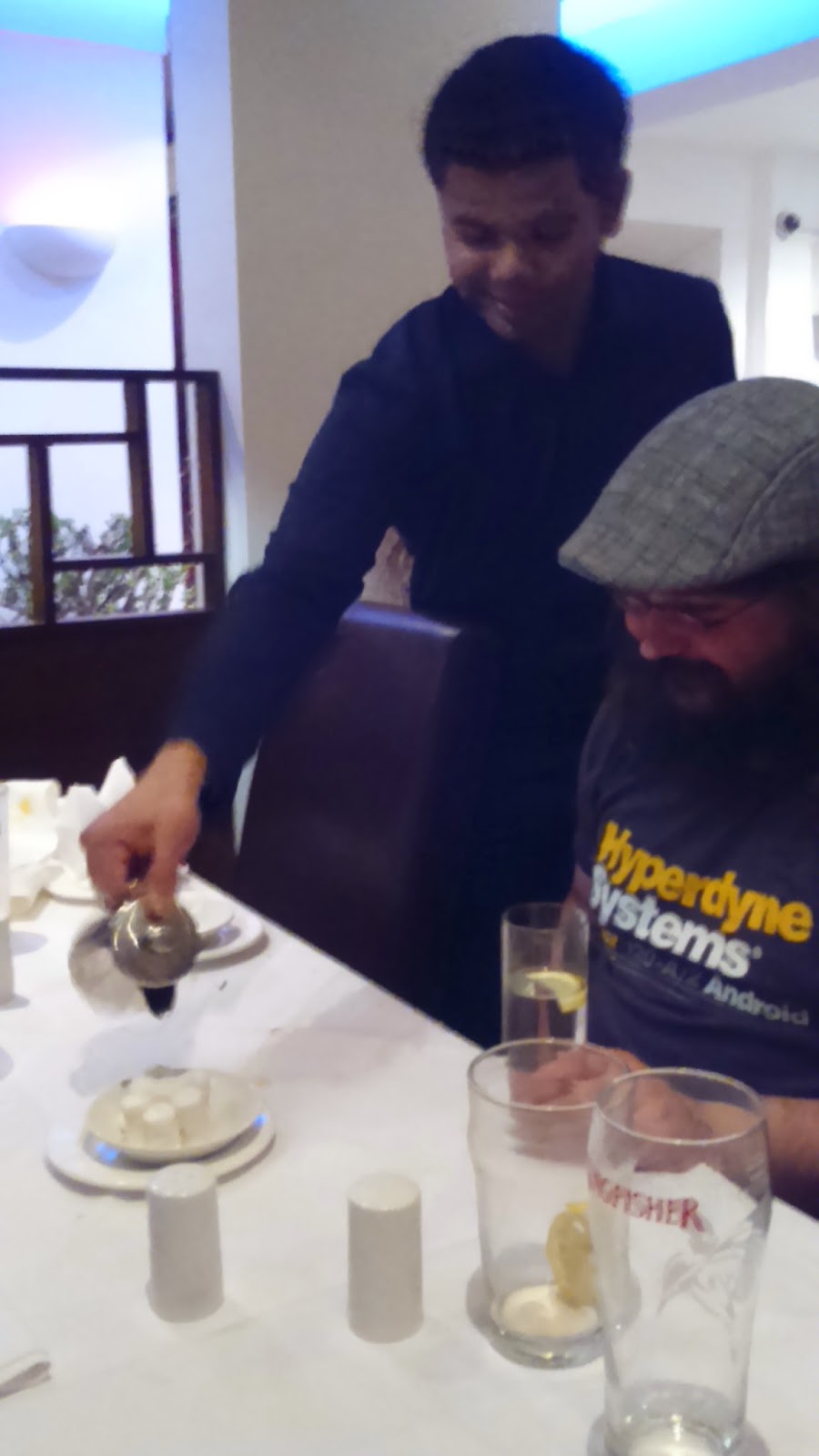 Magic? No.
Amazing? Still, no.
Mildly entertaining and a great conversation piece? Absolutely!
I always appreciate little novelties like that. It shows the restaurant are willing to go that extra mile for their customer (at no extra cost too!). I have seen this many times before and it always goes down well. The hot towels aren’t even a bad quality either. So many places now palm you off with wet wipes stuck in a microwave, but here at least we got a full flannel and a bit of a show at the same time. 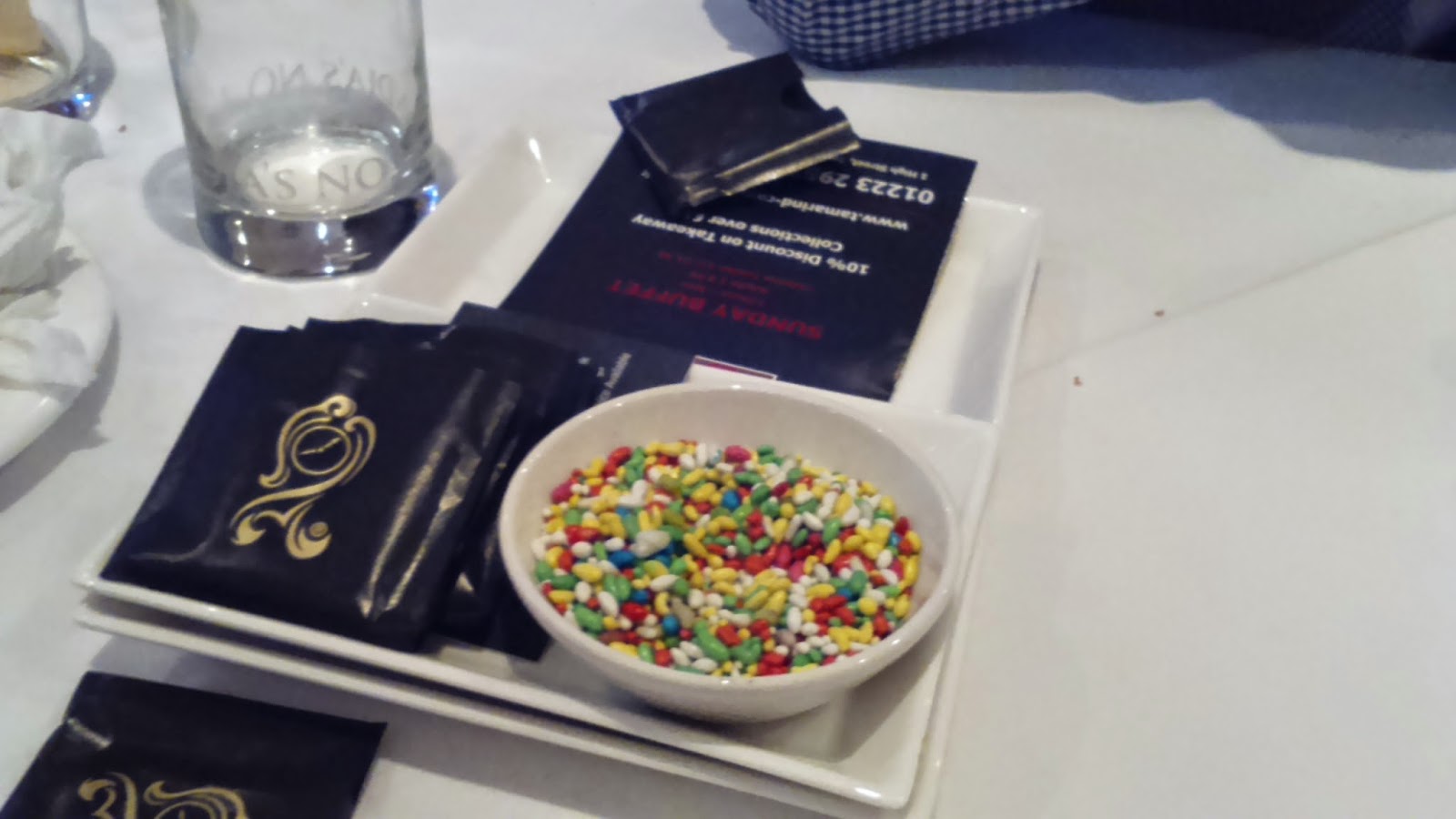 Once we were finished we were asked if we wanted tea or coffee. We all politely declined.
Even though it was a Saturday night and very busy we were NOT RUSHED in any shape or form….I am speaking to you, Maharajah!  After a nice conversation and a bit of digesting we decided to call for the bill. We were presented with some chocolates and aniseed sweets, The bill came to about roughly what we expected and we were handed some cards and a take away menu which advertised their Sunday buffet service. Something I have yet to try.
Once again The Tamarind gets everything right. It provides and sleek modern atmosphere with excellent customer service and very fine cuisine. All the bells and whistles you’d expect from Indian restaurants, which you may notice by now are slowly dwindling these days, such as hot towels, chocolates with your bill, and good manors, are all included here at no extra cost!
The place is reasonably priced and has fantastic wheel chair access too. 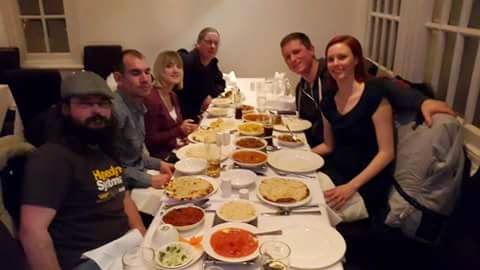 Thanks to everyone for coming and thanks to the staff at The Tamarind for a great night!
9/10