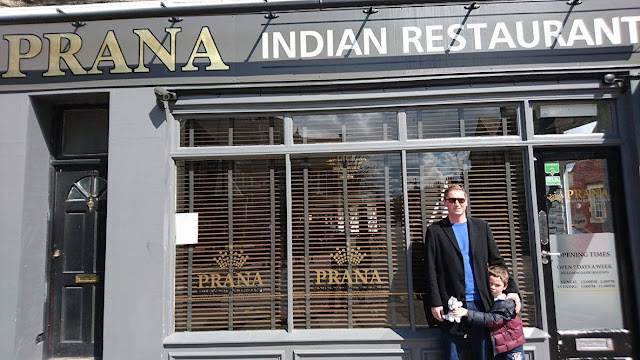 A short time ago I reviewed what I dubbed as the “New kid on the block”, one of the newest additions to the Indian restaurant scene down Mill Road. Yet Prana has already decided to reinvent itself in almost every way imaginable, with what seems a very expensive refurbishment.
Prana clearly needed it in my opinion. Judging from my previous experience the place did fantastic food but was incredibly claustrophobic with the seating area being located in the catacombs of the restaurant. Space, lighting and acoustics were all suffering and it really struggled to pull me back to the restaurant.
All that has changed now and they have done a fantastic job giving it a new look and feel. 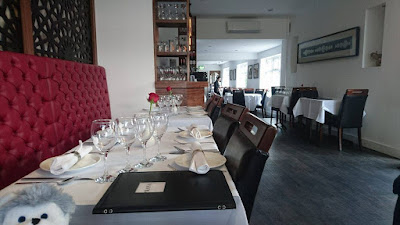 The place has had a massive extension installed out the back giving it a huge amount of space. This makes the restaurant dining area is all on the same level (compared to being mostly in the basement in the past). There is now lots of light and the interior decorating giving it its own unique style. It has been modernised (but still with a hint of a traditional influence). There is a real classy feel to the place now and everything is tastefully done. I would certainly be shocked if anyone arrives feeling like they prefered the old restaurant. 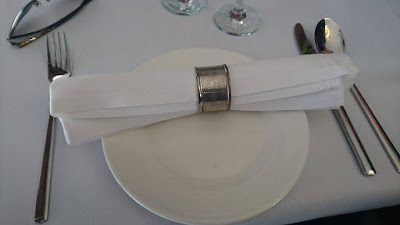 Classy – Even the napkins were folded with a metal ring.
We were seated next to the front window so were able to people watch across Mill Road (something  i’ve always found fun as an activity and something you were simply unable to do in the old Prana).
The staff here were incredibly friendly. They couldn’t do enough for us. You really get the full family business experience here with all sorts of people coming to say hello and making us feel welcome. A nice touch. We really liked that. 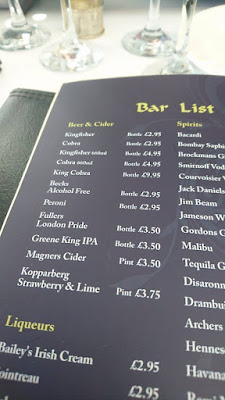 Looking at the menu I noticed that beer prices were ridiculous. £5 for a large bottle of beer (roughly a pint). Sadly they didn’t seem to offer any draft beer either, which was disappointing. I would have liked to see them offer a BYOB (Bring your own beer) policy as these prices really made me feel like I couldn’t relax and enjoy myself without worrying about the bill. 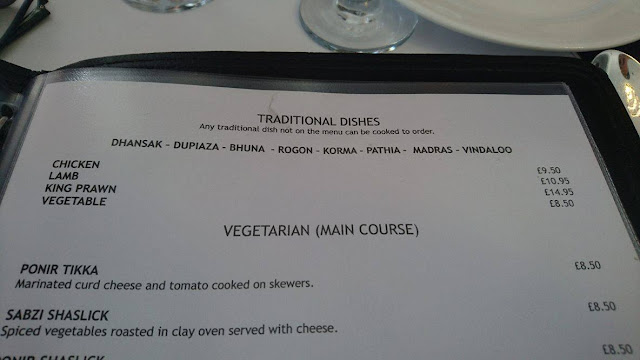 Looking at the food, the prices tend to be as expensive as the beer. Most of the popular curry we all know and love comes to roughly a tenner (without rice, which comes to a staggering £4 upwards on top!). That’s £14-£15 for a bog standard curry and rice. 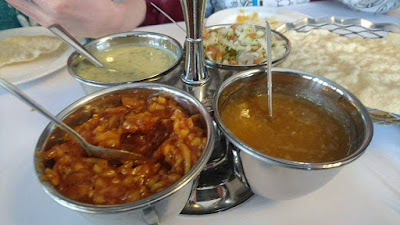 While we mulled over what we wanted we ordered some papadums. They were kind enough to offer us a couple free on top, which was really appreciated, as you can never have too many papadums!
The mango chutney, onion salad and yoghurt were all quality. They tasted great and had good texture. The pickle was lacking a little. All portions were well presented with generous portions.
Talking to the very friendly restaurant owner, he was explaining his plan for the “new Prana”. He has turned the place upside down and modernised Prana for the new age. He admitted the food on the menu was more expensive than the standard Indian restaurant, and for good reason. All the ingredients are fresh and of the highest quality. Top notch chicken breast, Tilda rice and freshly crushed spices…
…and this clearly showed with the food as it came out. 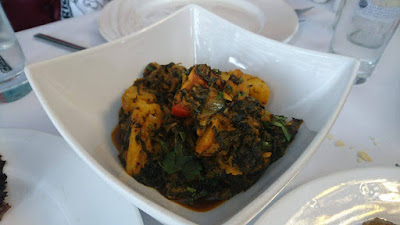 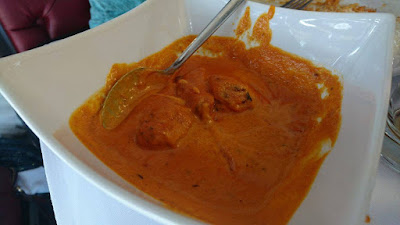 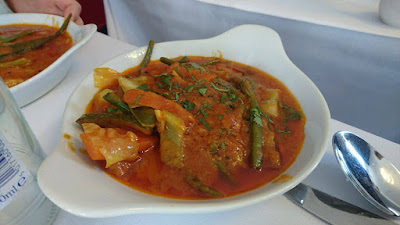 Biriyani curry.
Everything we ordered was incredibly well presented, tasted fantastic, and came out in good time. The food quality was clearly there, especially in the chicken which was very thick and juicy. My chicken vindaloo may have cost nearly £15 but tasted exactly how a vindaloo should, and rightly so!
The vindaloo lacked that heat which we’ve all come to expect, but talking to the restaurant owner you realise that this is not what they are going for. They are making cuisine here, not spicy slop in a bucket. This will suit most people though I know, but there are a few spice heads who will be disappointed by this.
The chicken tikka masala was incredibly creamy and rich, the chicken chunks were huge and full of flavour. I really couldnt recommend it enough! The kind of people who order chicken tikka masala will not be disappointed by this, they have nailed it. This is exactly how it should be made! Top marks!
Everyone was very happy with their meals and there were no complaints all round.
Rice portions were generous, fluffy and well presented.
The saag aloo was exceptional too. The texture, flavour and portions were all perfect. An excellent side dish to any curry. 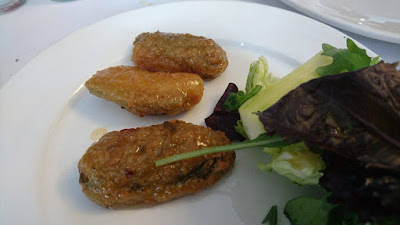 Marrechi Ponir – fresh whole chillies stuffed with cheese, covered in bread crumbs and deep fried.
We also had the pleasure of trying a couple of starters too, courtesy of the manager.
The Marrechi Ponir is a very unusual dish which I have never tried before. Essentially, they are cheese stuffed chilies, deep fried, in bread crumbs. I found them a pleasure to eat, but something I could easily see dividing opinions. Clearly not for everyone but executed well none of the less. 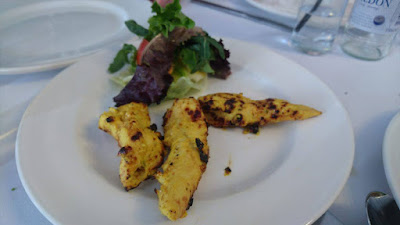 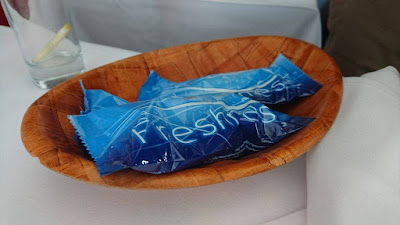 Once we had finished eating, chatting, and taking in our surroundings, the staff cleared our table and presented us with some hot towels. They opened up the packet for us and handed them over individually.
We were also presented with an “After 8” mint with our bill, which is always welcome.
Our bill was on the expensive side considering what we had ordered. I was paying nearly double what I have come to expect in a standard Indian restaurant, but Prana is not aiming to be a standard Indian restaurant. You have to pay for quality now days and Prana certainly offered that.
Conclusion.
Prana hasn’t modernised, but revolutionised! The place is unrecognisable compared to what it used to be…and that is no bad thing.
They have now completely reinvented themselves and have set out to become a modern, high quality, Indian restaurant, which provides a good mix of traditional Indian/Bangladeshi cuisine and the more common British Indian stuff we all know.
If you are looking for a spicy curry to blow your head off after 10 pints down Mill Road, then forget it, this is not the place for you. But if you are looking for a welcoming, modern (yet still slightly traditional), diverse menu which offers you nearly everything you could want (and maybe some stuff you have never tried before), then Prana is the place.
Everything is executed properly here and quite clearly only the best will do. However, just be willing to pay for it, as it’s noticeably more expensive than what most of us are now accustomed too. I have a sneaking suspicion that most people will not mind paying for quality food, and I don’t either, but I see no reason why they insist on charging so much for the beer!
I look forward to coming back here and I can really see myself doing so.
The main question I leave myself it this, are there Indian restaurants in Cambridge which offer a similar quality for less?
Score pending…
Thanks for reading.