Skip to content
With the weekend here, the sun shining, and a long list of Indian restaurants still yet to try, we decided to pop down to the famous Brick Lane and tick off another Indian restaurant on my long long list. 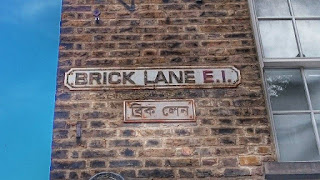 We decided to go with one of the most sought after restaurants down Brick Lane – the legendary, Sheba. A place which pops up in articles left right and centre in the London Indian restaurant scene. It has won a ton of awards in its time too, so I was very excited to try it! 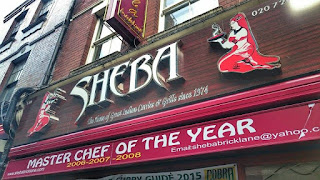 Sheba boasts a huge resume of awards from the Indian restaurant community which includes “Master Chef Of The Year 2006, 2007, 2008“, the “Cobra Good Curry Guide 2015” and “The Best Curry House In The UK 2015“, and many more.
So it has a lot to shout about, especially considering the stiff competition in the area. Shebas is a place which needless to say has been top of my list for a long time so I was dying to see what all the fuss was about!

Upon entering we were warmly greeted by the staff and shown to our seat. The place was empty at the time so we had our pick of tables. The place is small but nicely laid out and quite modern. Don’t get me wrong, the place is hardly glamorous but it still had its own atmospheric charm which I quite enjoyed.

One thing I immediately noticed was the staff to customer ratio. There were at least 5 waiters running around tending to customers during our time there. Considering the size of the place I was incredibly impressed and well looked after.

When we were asked for a drink order I noticed that they only had Cobra beer on tap.
There is nothing wrong with Cobra beer, in fact I quite enjoy it, but I am used to having a selection to choose from.  Considering how competitive it is in this part of London you would expect at least a choice of two! 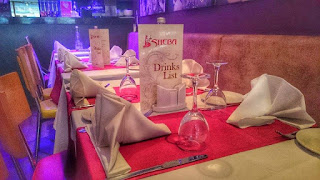 Looking at the menu I saw a good selection of cuisine. There was a fantastic choice of fish, a decent choice of curries, and lots of authentic Indian, Pakistani and Bangladeshi dishes too.
I also noticed they had dishes to cater for the lager louts who often flock to Brick Lane to have their socks blown off, such as the Naga’s and the very tacky (and dangerous) sounding Bollywood Blast.
There really is something for everyone here. There shouldn’t be anyone turning up to Sheba’s and being unable to find something to cater for their needs. 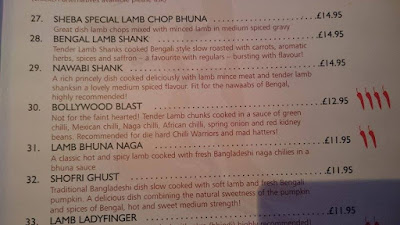 I must admit, the Bollywood Blast did tempt me!
We ordered some Butterfly King Prawns for starters while we decided to read through the tonnes of choice on the menu. The Butterfly King Prawns are essentially prawns cooked in lightly spiced crispy batter. They sounded far too good to resist and were under a fiver, so why not? 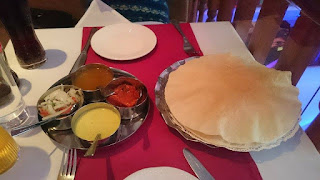 Papadums – Onion salad, yoghurt, mango chutney and lime pickle.
We ordered some papadums along side the prawns while we decided on what we wanted. The papadums came out immediately which came with a selection of side sauces – Onion salad, mango chutney, lime pickle and yoghurt.
Each one was prepared excellently and didn’t disappoint in the slightest. I was particularly fond of the lime pickle which came across as incredibly fresh, though it did lack its trade mark bitterness. The onion salad was crudely chopped but otherwise I had no complaints. Both the yoghurt and mango chutney were fantastic 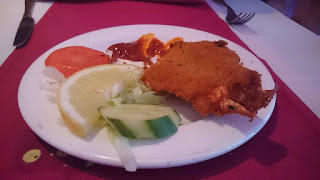 Butterfly prawns and spicy batter.
Our butterfly prawns came out soon after the papadums.
It certainly wasn’t what I expected from the description on the menu, but I was by no means unfulfilled by the dish. It made a great appetiser for a reasonable price. 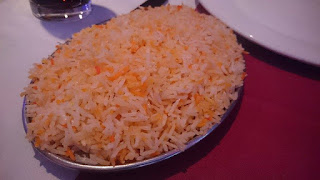 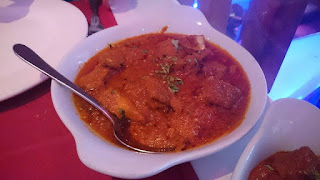 Chana Gohst Bhuna.
I eventually decided to go for the chef’s speciality, the Chana Gohst Bhuna, which consists of lamb pieces slow cooked, with lentils, chilli, garlic and chef’s special sauce. I went for the pilau rice as a side portion which made a great combination with the Chana Gohst Bhuna. The food came out promptly and looked great once on the plate. The lamb was incredibly tender and the sauce had a great kick to it. It was about vindaloo heat which was great for me. No complaints all round!
My girlfriend had a traditional dish off the fish menu called the Macher Tanga Fish Curry, which is tilapia fillets cooked with tomato sauce. The dish was received well and was considered an very nice dish by her critical pallet. 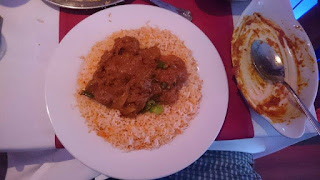 Chana Gohst Bhuna with Pilau rice.
The dishes were both chef specials so it came to a staggering £13 each, which made me feel like Sheba was on the expensive side.
I noticed regular curry too was much more than you would usually expect to pay down Brick Lane…or any establishment really. Rivals next door such as Aladins, which come to around £7 for a standard curry, were dwarfed by the prices in Sheba, starting at £9.95 upwards.  In fact, I don’t think I have ever seen a basic chicken curry sold for ten pounds.
The rice was a little on the steep side with mushroom rice tipping over £4! 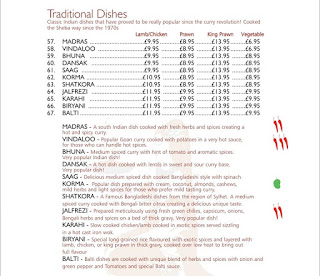 Once we had finished our meals the staff took our plates away and we were awarded a hot wet wipe. They had the courtesy of opening the pack and presenting it for us to take. We were incredibly pleased to receive them on a hot day like this after a spicy dish as we were sweating all over the place. So many places seem to be phasing out the wet wipe, which I am glad to see Sheba is ignoring! Keep the tradition alive fellas!
When we asked for our bill we were presented with the paper bill and two chocolates. The bill came to more than I expected and well over £40 for two of us. This was to be expected after looking back at the steep prices on the menu, and though the quality was all there, I still couldn’t help but feel that I was not getting value for money.
Conclusion:  My girlfriend and I both enjoyed Shebas…a lot. Its certainly a place which I feel confident that anybody can turn up and find something they like on its diverse menu and will leave feeling satisfied.
The staff were helpful, polite and numerous. They really couldn’t do enough for you and there was always someone close by if you needed them, which is something many bustling places struggle with on a Saturday night down Brick Lane. I couldn’t fault the service in here at all and I feel that this was probably their strongest point.
The establishment itself was well presented, clean and quite modern, though might be a little dark and dim for some.
The cuisine was excellent and there was so much to chose from. You could really tell the quality was there just by tasting the food. The lamb especially was very succulent and full of flavour.
The problem I had was that it was all undermined by the prices, which again, get exacerbated by the the fact that so many places of equal quality in the area that are much more competitive, offering more style and novelty to their dining experience.
I had no regrets to coming to Sheba’s tonight. The papadums, lamb and fish were all of a very high standard, and there are still some great things on the menu I am tempted to come back to try, such as their fish menu, their famous Shashlik special or even their terrifying Bollywood Blast. The thing which puts me off is that I could easily dine out at neighbouring Monsoon, Aladins or Tayyabs for half the price and probably get the same quality, and for that I have to say that Sheba struggles to find anything which makes it stand out from the very crowded and competitive Brick Lane restaurant scene. However, it should be noted that Shebas has been here for generations now so its clearly doing something right!
8/10 – Good food, good choice and good service, just be prepared to pay for it!
Thanks for reading!