Skip to content
Walking through Mill Road the other week I was absolutely mortified to see one of my favourite Indian restaurants being refurbished!
The Kohinoor was one of the most beautifully decorated Indian restaurants I have ever seen, and it has always had a very special place in my heart (especially since it was the venue of the first ever Cambridge Curry Crew event 6 years ago!).

As you can see here, it was colourful, vibrant, authentic, and unique. It was such a cosy and atmospheric place to dine in. 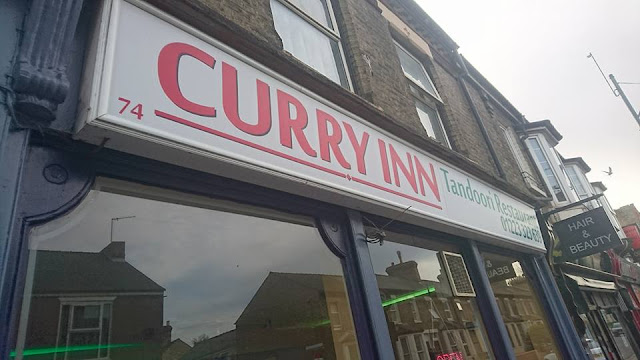 The first thing I noticed was that they had changed the name of the restaurant to “The Curry Inn”. A very cheap, and, lets be honest, patronising name. Peering through the window I could see that they were gutting the place inside out. The walls now painted bright white and all the plants gone. I really don’t (and still don’t) understand what they were thinking. My concerns were shared on the Cambridge Curry Crew facebook page too, so when I heard that they had now reopened I was ready to tear this place to pieces. 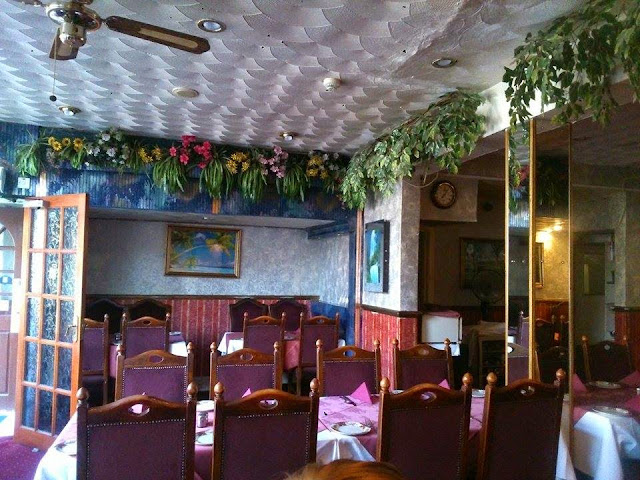 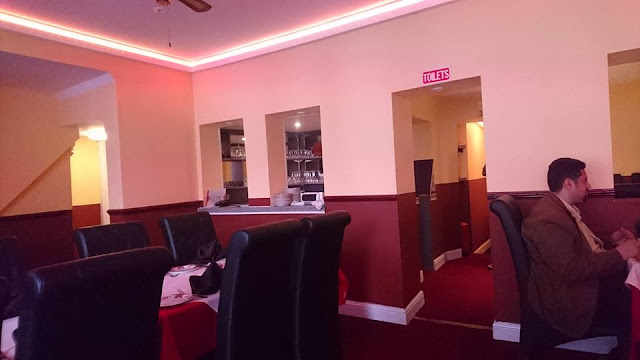 Walking in I was gob smacked! The place was unrecognisable. You could tell that they had tried to make the place look modern but it just looked unfinished. The place was bare and a mere shadow of its former self. They had a neon light which runs across the ceiling which slowly changed colour over time. Something which was clearly part of their modernisation idea but sadly failed to capture the imagination, 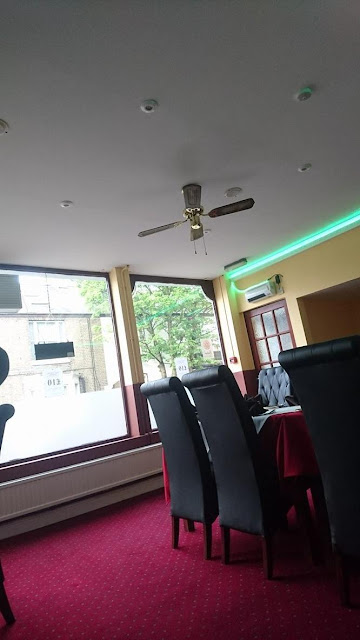 Still the same old carpet!
I was really glad to see the same lovely staff in there as before, so the restaurant probably hasn’t changed hands.

They were quick to seat us down and ask us if we wanted any drinks or papadums. I was disappointed to learn that they had no beer on tap anymore, only bottles. This is another thing which I had to mark down as inferior to the old Kohinoor because of this stunning picture below… 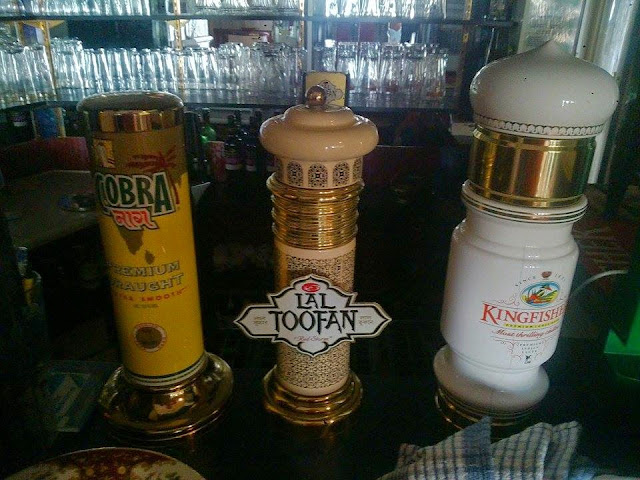 The Kohinoor taps. A thing of beauty and now a distant memory.
We ordered 4 papadums and two large bottles of Cobra. I was pleased to see the Cobra beer was a respectable £4 each. Something compared to other Indians I found quite competitive (Cam Spice – £4.50). 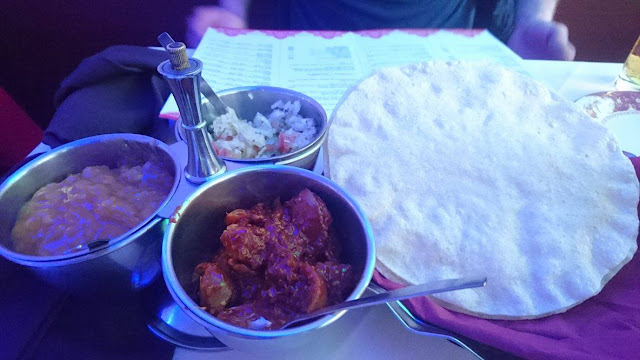 Sorry for the bad picture folks!
The papadums came out in good time and were accompanied by three sides. Mango chutney, lime pickle and onion salad. The mango chutney and lime pickle were both decent. The onion salad was very finely cut and was slightly sticky, like it was being held together by something. Whatever it was it held it together well and stopped it falling off the papadums, and added some sweet flavour to it. 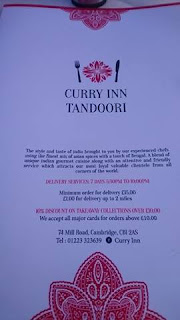 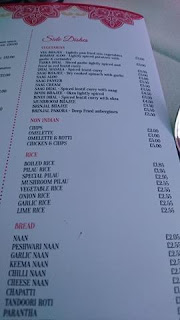 Looking at the menu while we enjoyed our beer and papadums I noticed the place was still very good value. A curry being £5.50 and plain rice being £1.85. Impressive stuff! In fact, you could come have a curry for the same price as a Burger King meal! I know whose side i’m on!
There was a decent selection on the menu and a lot to choose from. I think most people will find what they are looking for at the Curry Inn.
I decided to go for my usual chicken vindaloo and plain rice. My friend had the prawns and a particular lamb dish which we have both forget the name of in our haste. I also ordered some plain boiled rice and saag aloo on the side. 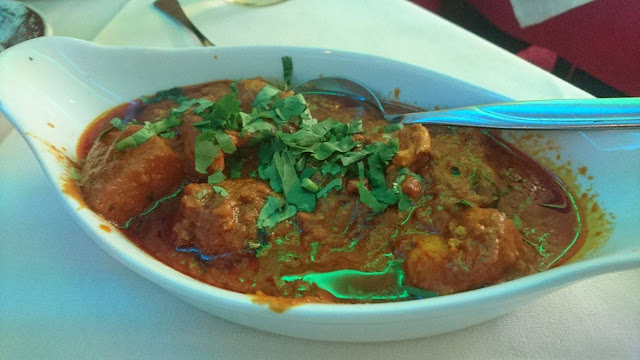 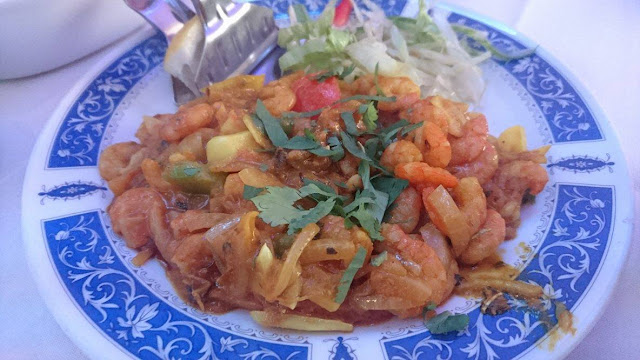 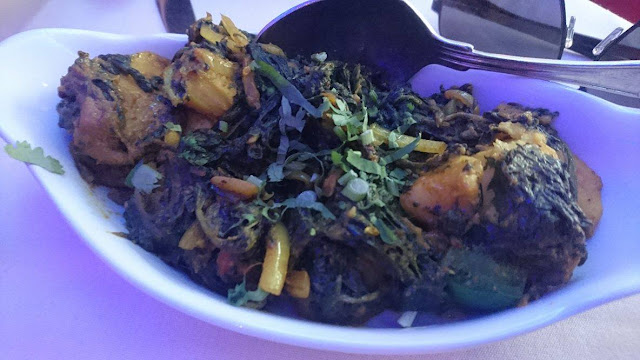 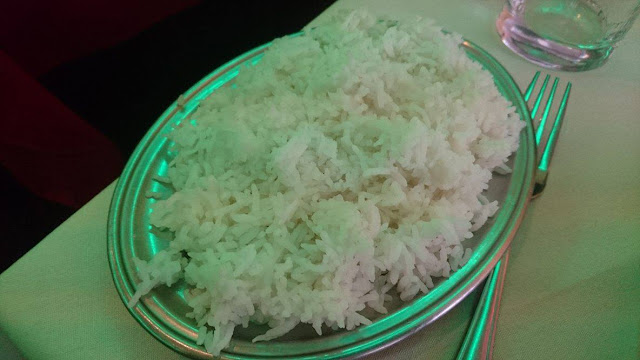 Boiled rice.
The food all looked great. The saag aloo especially was spot on. The chicken vindaloo was decent and had a good kick to it, as it should be. I noticed that the chicken was cut up quite small, I couldn’t help but think that perhaps this was done to give you less chicken, as it certain felt so. Maybe this is how they keep it competitively priced.
The boiled rice was a bit damp and sticky, I think it had been cooked with too much water. It made the dish quite heavy and it filled me up too quickly. It was a shame as its such a basic dish to prepare.
The prawns were quite uninspiring. My friend seemed to enjoy them but I was not overly impressed. It came across as something I could have even prepared myself. His lamb dish was the star of the show however, the lamb was tender and full of flavour, I would really recommend this to anyone thinking of visiting. 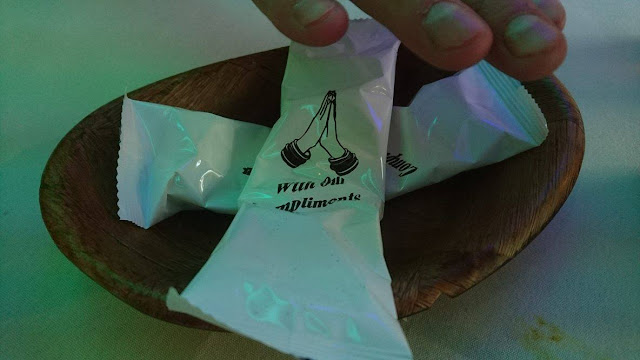 Once we were finished we were handed our hot towels. They were really needed too as the vindaloo packed a punch! We were pleasantly surprised by our bill which worked out very cheap considering what we ordered. This is clearly the most appealing part of the The Curry Inn, where other places like its neighbour Prana are trying to corner the more expensive end of the market, The Curry Inn seems to be going for cheap and cheerful. Its good to see we are getting a choice here and Indian restaurants aren’t all going in one direction.
Conclusion – As you can probably tell, I am very disappointed by the recent changes from the Kohinoor to The Curry Inn. I really didn’t think the place need modernising or changing at all. It was perfect how it was. In fact, from my opinion, the only thing which did need modernising was the only thing they STILL haven’t been done yet, and that’s getting some online presence (no website, no facebook page, nothing).
The interior has been made to look modern and minimalist, but fails miserably. The place has lost its character and its main selling feature and just looks bland and boring. I am putting its unfinished look down to the restaurant opening prematurely in order to keep revenue coming in while they continue to fix the place up. I might give the place another visit in 6 months time and see if they have done anything else to the restaurant.
The food was nothing inspiring but shouldn’t offend anyone either. I am glad to see the vindaloo was served hot but sadly the rice was poorly cooked which made the meal very heavy and filled me up way too fast. The saag aloo and lamb were very good and the papadums/sides were nice also, its a shame the prawns let them down. I really hope they reinstall the three beer taps as it was one of the only places in Cambridge which served Lal Toofan on tap.
I cannot see myself recommending The Curry Inn to anyone for now, the interior decorating, atmosphere and food quality are all below standard. That being said the place does have great value and marvelous customer service so it does have something to offer. I look forward to seeing what happens to the place over time. I wish them all the best and hope they can make it work.