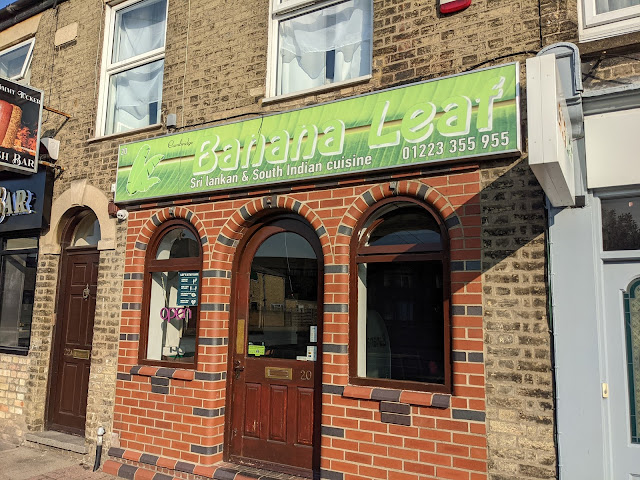 I made it! I finally made it!

After all the hype, all the reviews, and all the delicious photos of food on The Cambridge Curry Community, I couldn’t take it anymore and I finally made the effort to go to The Banana Leaf on Milton Road.

I have visited all the traditional Indian/Sri Lankan restaurants in Cambridge over the years. Some have been better than others with places like Cocum being a massive disappointment and The Rice Boat blowing me out of the water every time. I felt like visiting The Banana Leaf could have gone either way but luckily with all the positive reviews on this group I was certain that I was in for a treat…and I was not disappointed!

But first of all, a gripe.

If you aren’t from this part of Cambridge then it is an absolute nightmare to get to. Mitcham’s Corner’s biggest problem has always been parking. For anyone coming from outside the Cambridge bubble is going to have a miserable time. Luckily for us, we visited on a Sunday evening so there was free parking outside. It just took a few circles of the ring road for something to become available. There are 4 paid parking spaces just around the corner but they were unfortunately full (and probably very expensive). 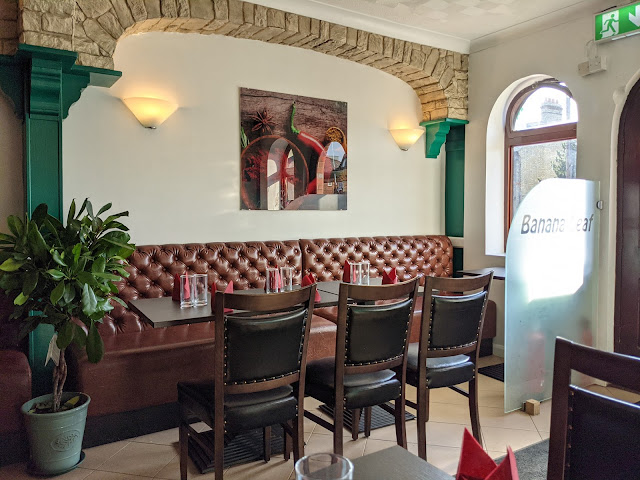 The restaurant itself was very pleasant to be in with really nice interior decorating. It’s a small place but they’ve done well with what’s available.
The chap serving came to us…eventually, after finishing his phone call and sweeping the floor. He had absolutely zero sense of urgency about him. We were the only ones in the place at the time so I was expecting better. I like to see things positively so decided to see this as something from the more laid back Sri Lankan lifestyle.

Unfortunately, it almost felt like we were intruding on them, even though we had booked a table. When you consider the world-class customer service from other Indian, Bangladeshi, and Sri Lankan restaurants in Cambridge, this was a little disappointing.

Dinner time is not something to be rushed but if you were paying for that “pay and display” parking around the corner you’d be getting stressed. 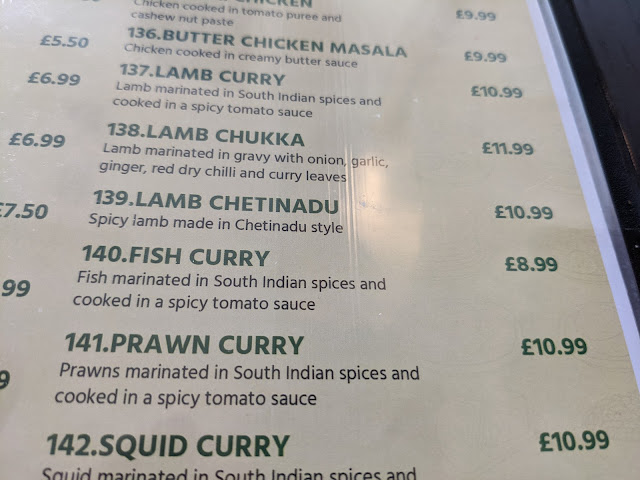 The menu was fantastic with so much choice! In fact, there was so much that we really struggled to decide on anything!
Thanks to the excellent reviews by the many fans of Banana Leaf in The Cambridge Curry Community, we decided to pick a few things recommended to me over the past few months and share them between all three of us.
The Masala Dosa – This really is a sight to behold when it first gets put on your table! I’ve had it a few times before but have never seen anything so grand until I came here. A giant crispy lentil wrap with mashed potato masala in the centre.
This was probably the best I’ve ever had, as it felt like a substantial meal in its own right. It was great to share too. My only issue was that one side was a little too crispy but the centre and other side were just right. This made parts of it hard to eat and a little messy but it wasn’t too much of a problem.
It tasted fantastic!
The Lamb Biryani – Utterly superb. The lamb quality was simply divine and just fell to pieces. The texture was incredibly succulent as well. It came with a very small side of curry sauce which I thought was too small initially but ended up being enough. I’d have welcomed a slightly bigger portion and it certainly wouldn’t have killed them to provide this, but otherwise, this was faultless.

The Banana Leaf Special Noodles – Ceylon curried noodles with mutton, chicken, and prawns. This was a particular favourite of my son’s. He found it a little spicy but absolutely loved it. It was just as well he ordered a mango lassi to extinguish any heat! I personally loved it too and didn’t think it was too spicy. I thought it was an excellent take on noodles with a South Indian twist.

Fried Jumbo King Prawns – These for me were the star of the show. The prawns were absolutely dynamite! Big, juicy, succulent, and plentiful. Everything a prawn should be! What I’ve noticed from Banana Leaf is that all the meat is not only top-notch but they are generous with the portions too. In the lamb biryani and the king prawn dish, there was an excellent amount of meat. 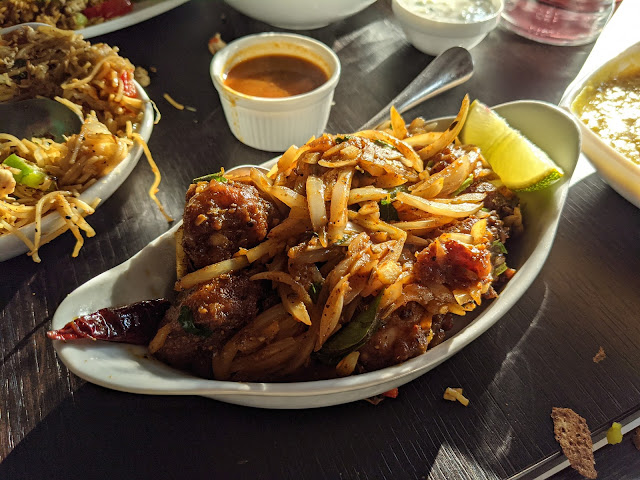 Daal Curry with Porata Bread – This was another fantastic addition to the meal. Great for sharing too. The porata was extremely crumbly and hard to use with the daal but it tasted so good. I thought the texture of this daal was particularly good and was very easy to use with rice and other parts of the meal. Sometimes I find daal too thick or very watery and can really ruin the purpose it was meant for but it was absolutely on point at The Banana Leaf.

My wife had a glass of the house red which was very ordinary (especially for £7!) but we had a good chuckle at the Fat Bastard Chardonnay. If anyone has had this then please let us know what it’s like as it really made our day seeing it on the menu

The bill came to exactly what we expected. The staff were much more attentive at noticing we had finished, cleaned our table promptly, and got us our bill in good time. Maybe they were off to a rusty start at the beginning as they had just opened? Who knows.

Either way, Banana Leaf was worth the journey into Cambridge. It is always good to see something of this quality in the North of Cambridge and it certainly ranks as one of my top authentic Indian restaurants in Cambridge. It is a hard choice between the Rice Boat but either way, the more the merrier!

A big thank you to all the people in The Cambridge Curry Community for suggesting this one!