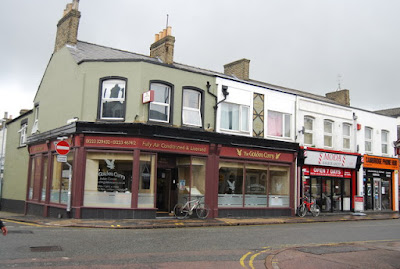 After a long wait for the refurbishment and reopening of Prana, we decided to give up waiting and hit The Golden Curry for our 23rd Curry Crew event.
Like Prana, the place has been through a refurbishment a few years back (as we covered here). Being next door to Prana meant the Golden Curry was the next best thing for our 23rd event to save any further complications in organisation.
Located on the infamous Mill Road, known for its numerous ethnic places to eat and drink, Golden Spice fits right in and has been an established member of the restaurant community in Cambridge for decades.  So naturally, it was begging to be investigated by the Cambridge Curry Crew! 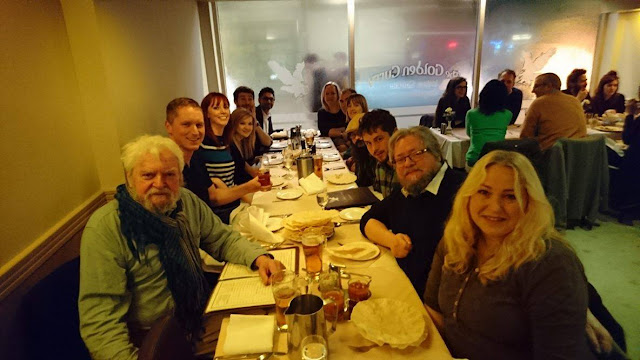 I was pleased to see we had a massive turn out tonight, with 13 people joining us for the meal. It was good to see so many new faces with people from all over the county and different walks of life. Not to mention seeing some familiar faces who have been coming for years now.
Upon entering we were quickly seated to a big table along the back of the restaurant. The place still has a very spacious, clean, and modern look to it, and was bustling with customers (which is always a good sign). The atmosphere in here was great, even for a Saturday night.
This did create a few problems however. A busy restaurant means a busy restaurant indeed. It took a while for the waiters to get around to taking orders throughout the night. 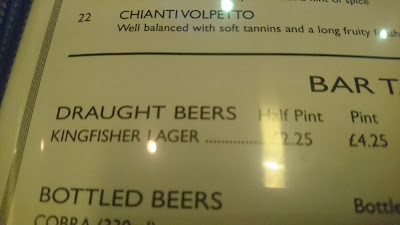 Like I said above, It took a while to get our drink orders through, which gave me some time to study the menu. Several of us had to share menus as there were not enough to go around, so it took longer than it normally would to pick out what we wanted. I was glad to see one of my favourite Indian beers, Kingfisher, on tap. I was absolutely shocked (though sad to say, not surprised) at the prices of the beer, which came to £4.25 a pint. This still may be cheaper than the insulting prices they had in our Prana review a while back, and this may, or may not be, the average price we have to pay now days, but it never gets any easier to accept. 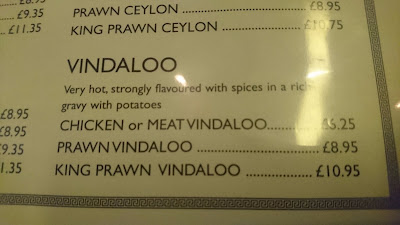 To balance the beer prices however, I was very happy to see a good value curry on the menu, after all this is why we are here! A chicken vindaloo came to a competitive £5.25. This, with a portion of rice coming to the average price of a Burger King meal, you have to wonder why you would ever want to eat fast food again when you can just get a curry from here!
Golden Curry had a very decent selection of different dishes on the menu, with a large House Specials menu, a Chefs Specials, Tandoori Specials and a Thali option too. Nobody was going to leave here feeling disappointed in terms of choice. 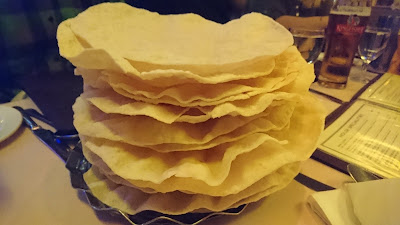 Once we finally got our drink orders through we had to wait a little while for our papadum orders to be taken. Again, it was very busy tonight, so its up to you whether you take that as a good or bad thing.
We ended up ordering 2 papadums each which came with a selection of three side sauces. Mango chutney, lime pickle and onion salad. I was sad to see the mint was missed but they were more than happy to bring some out at no extra charge. 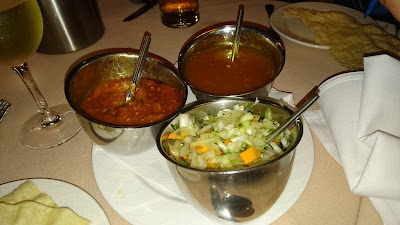 They ended up throwing together some extra free papadums for us, which is always welcome. The side sauces were all decent quality and good texture. I was happy with the portion sizes and  presentation too. The spinning metal containers make it easy to share around a big table, though they only gave us two for a very long table so we had to ask for a third just so people could reach. 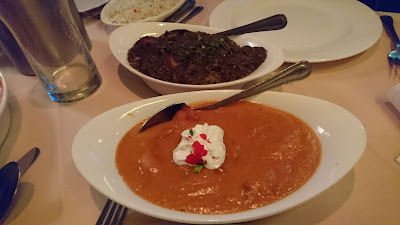 Once we were done we were in for another long wait, this one being the longest by far. It took over 2 hours from coming in to the restaurant to getting our meal. They gave us some free papadums as an apology but we politely declined as many of us were feeling full up from the last tower of papadums and just wanted our mains. 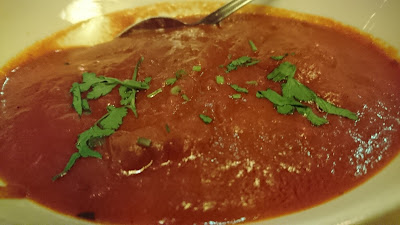 Once the food eventually came out we were mostly impressed with the presentation and look of the food. It came out in white china bowls and looked a very decent quality. I was personally was very happy with my lamb vindaloo which had some very tender lamb and a good spicy kick to it. The green herbs on top gave it an exciting colour. 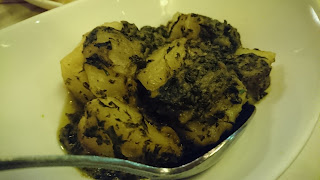 The saag aloo was top notch. The portion size was quite small for a main but it tasted great. I never doubled checked the bill to see if the order was wrong and they had accidentally ordered a side instead of a main but either way it was a great addition to my curry. The potatoes were soft and the spinach was full of flavour. I might have liked to see the potatoes a little crispier on the outside but over all it was a great effort. 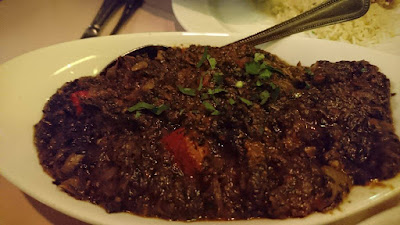 Here are some other examples of the food from friends at the table. 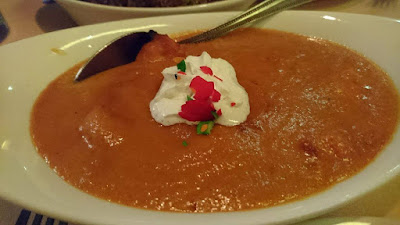 Chicken tikka masala
The rice was well presented. The colour, the texture and the flavour was all good. My mushroom rice was a generous size and was a fine addition to my meal. Though we did notice a little fumble from Golden Curry from a rice down the table. One of the rice portions had a chunk on burned rice in it, probably from where it had been cooked early on and left to wait for the other dishes to cook in the kitchen. These things happen. 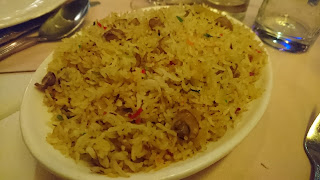 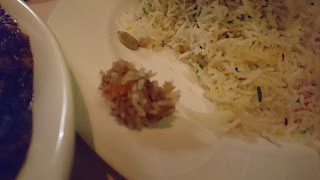 Oops!
It was safe to say that everyone had enjoyed their meal and I heard little complaints about the rice incident above. Ignoring the long waiting time I considered our night at the Golden Curry a success. The waiters offered us a hot towel to freshen up with after they had taken our plates, which was a welcome addition as I worked up quite a sweat after a vindaloo. 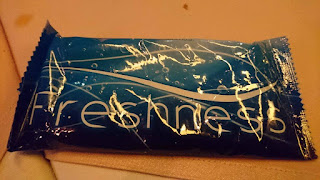 They asked us for dessert, but by this point we were starting to get a little unsettled being sat here for nearly 3 hours, so we politely declined as we just wanted some fresh air and to stretch our legs.
They also offered us a selection of chocolates with our bill which was just what we needed after something so savoury. The bill came to about what was expected for 13 people, no nasty surprised. They were happy for some of us to pay by card and cash. 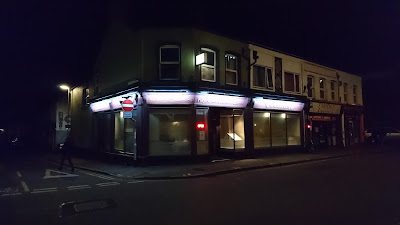 Conclusion:
I think it was safe to say that our night at the Golden Curry was a success. The food was decent, the atmosphere was marvelous, and the refurbishment from two years ago is nearly as fresh and modern as the day it was finished. The restaurant did a great vindaloo with some very tender lamb which has a real spicy kick to it. Their saag aloo was also top notch. I was very pleased to have some good chats with some of the waiters in the restaurant who seemed very proud of Golden Curry and all it has offered to Indian dining in Cambridge over the decades, which is something not often seen in local restaurants.
I would have liked to see them offer a wider selection of Indian beer on tap however (and much bloody cheaper too btw!).
Taking in to consideration that it was a busy saturday night the place still felt very slow. This is not the first comment I have heard about the Golden Curry being slow either, and now I have experienced it myself. If they are dealing with mostly pre booked tables and have been around for decades now, I would like to think they would hire the correct staff to cater for it. All this could have been forgiven if they came across even slightly sorry for the slow service.
As a restaurant the Golden Curry is a decent establishment, but like I do with many of my reviews on Indians down Mill Road, the competition is fierce, so its hard to say whether I would recommend it with so many quality establishments next door.
Places like Curry Queen  for me are still going to trump The Golden Curry in terms of quality. And with award winning places like Prana always doing a damn good curry now reopening, with a brand new extension and refurbishment. Not to mention with the Kohinoor doing some of the best value in town with some of the most beautiful interior I have ever seen in an Indian. I cant help but think Golden Curry is going to struggle in comparison, even if its decent enough in itself.

So in conclusion, ignoring the competition close by, the Golden Curry being a decent Indian in itself, earns a 7/10 from me, though I cant help but feel some of my guests tonight may say I am being a little too generous.

(The last review score was 3.5/5)
Please let me know what your experiences are with Golden Curry!
PS.
I will be revisiting Prana once it finally reopens and then giving it the same scrutiny as Golden Curry tonight. Once I have finished both reviews I shall be updating my King Of Mill Road restaurant ranking to see if either two have managed to jump any of their rivals.
Thanks for reading.