Skip to content
My friend and I decided to revisit The Meghna on Victoria Road the other night for a cheeky curry before going out for drinks.

It had been 18 months since our last trip so I was curious to see how the place was getting on since my last visit. In my previous post I came to the conclusion that The Meghna was a decent enough establishment which served its purpose in a very competitive area in Cambridge but lacked that certain WOW factor which stopped it from getting top marks. 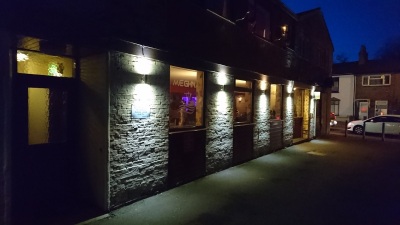 We decided to drive in as the restaurant claims to have parking. Personally, I couldn’t think where this parking was supposed to be picturing the restaurant in my head, so I decided to phone up to get a confirmation. The staff answered the phone quickly and politely told me that there was indeed customer parking in the back of the restaurant which was a huge relief for me.
When I arrived we found a small area behind the restaurant with some cars parked in already. There was barely enough room for my vehicle to fit in…but we eventually managed it.
Upon arrival we struggled to get in to the restaurant. My friend is a wheelchair user so we rely on flat floor entrances or ramps. There were three entrance doors in total and the only one which didn’t have a large step was locked. I went inside to ask for a ramp while my friend waited for me. Sadly we were told that they had no ramp but they would unlock the door which was accessible for the wheelchair.

After finding a suitable door to get through, we found a table to settle on. The restaurant’s interior looked stunning on the inside with beautiful prints on the windows, tasteful wall paper and warm colours throughout. The tables were incredibly well presented and modern, which fitted in well with the rest of the restaurants theme.
I noticed lots of stunning Indian/Asian art work and sculptures around the restaurant. I was very impressed and it was quite a sight to behold and felt very cosy with lots of points of interest.

I wanted to take lots of photographs for the sake of this blog but I didn’t want to impose on them too much. There was a buddha which particularly caught my eye which over looks the back tables of the restaurant.

At this point one of the staff members wanted to get their car out the parking area at the back which required me to move my vehicle, so I had to go out side and reverse it out the car park and put it along side the restaurant. I was asked to park next to a “No parking” sign which they claimed was safe as it was their own sign. I was really hoping they were right and weren’t just saying it to get me out the way.  I really didn’t want a ticket to be added to the cost of my meal!
Once I got back and reseated we were handed menus by the waiters. Like the restaurant, the waiters were also excellently presented in snappy suits. You really get a classy feel  from the people at The Meghna, even down to the cold and distant behaviour of the staff which you usually expect from pretentious high end establishments in say, London. I am not sure it was something  they chose to do on purpose but didn’t bother me very much as they were efficient and still very far from rude.
I noticed that the menu was quite competitive with beer prices being a damn sight cheaper than The Golden Curry the other night.  There was a good selection of food and almost everything you could expect from a standard Indian restaurant. Nothing jumped out as expensive and I was happy with the selection of specials on offer. Full menu here.

We ordered some papadums while we studied the menu, only to be brought out the most radioactive looking yogurt I have ever seen. It was incredibly vivid and exciting to look at but something I usually associate with being quite artificial. Upon trying it however the yoghurt tasted fantastic and went down a treat, so I was pleasantly surprised.
The mango chutney, onion  salad and pickle were all very well prepared, fresh and tasted great.  A fine addition to the papadums. Nothing to fault all round! 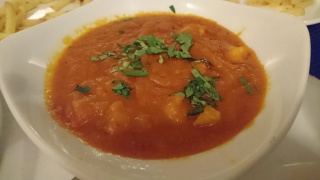 Pilau rice.
We decided to order a king prawn curry, a chicken tikka vindaloo with some pilau rice. Each came out in good time and with average sized portions. The king prawns were juicy, succulent and burst with flavour. The masala sauce in the curry tasted fantastic too which made the dish a real pleasure to experience. My chicken tikka vindaloo was sublime, the chicken was tikkad perfectly and had a lovely thick and chewy texture to it which went down a treat. The vindaloo also had a kick to it but not enough to blow my socks off. I didn’t mind this however as the dish was so delicious in its own right.
The rice portions were of an average size but good quality. The rice was fluffy and had a good texture to it. A fine addition to my chicken vindaloo!

Once we were finished the waiters took our plates and bowls away and gave us some time to chat and relax. We were offered the choice to buy a dessert but we politely declined. Eventually the staff brought us out a bill and chocolates presented in a leather book. Sadly there were no signs of a hot towel, though after a mild vindaloo it was not really needed.
The bill came to an expected and reasonable price, so neither of us were left feeling hard done by. We tried to create a little small talk with the staff but they still insisted on being short on words.
We were seen out by the waiters and we were on our way feeling full and satisfied. I was also pleased to find out that I did NOT receive a ticket for my parking.
Conclusion: The Meghna has come a long way in the 18 months since I last visited.  The place feels so cosy, modern, warm and vibrant yet still manages to offer good value and very good food. Nothing was done badly and everything was of a fine quality. The art work and interior decorating, including the ornaments and statues were all stunning and worthy of being admired in their own right.
The staff felt a little off and distant at times but still did a fine job of providing a good and well presented service, so there was little to complain about.
I was frustrated at the awkward parking situation. If anyone is thinking of coming to The Meghna then I would suggest finding your own parking or using public transport. I was also disappointed in their wheelchair access facilities too. I saw no sign of a disabled toilet and the only door which was suitable for a wheelchair was locked.
Despite this, I felt like The Meghna has won me over tonight. I could really see myself coming back here in future and now feel like I can recommend it over rival establishments in the surrounding area (Especially now Cafe Naz has closed down). A few minor tweaks to parking and access and this restaurant has nearly ticked every box.  I look forward to checking up on it again in the future.
9/10
Dont forget to check our their 10% off on deliveries promotion for even better value. (01223 727410)