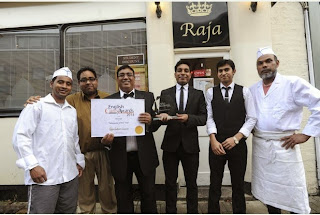 One of our very own Indian restaurants came out a winner at the English Curry Awards last year, winning the category of “Best take away in the East of England”. Naturally this got my attention so we decided to investigate!
Cambridge Curry Crew – Assemble!
I set up an event on the Cambridge Curry Crew Facebook group and booked a table for 10. I wanted a group of people to come with me so I could get numerous opinions on the place and see if it was really justified in winning that award.
The Raja is a reasonably new place set on the fine road of King Street, yet I haven’t heard many people bang on about it in a way which would justify it winning an award.
We decided to eat in, despite the Raja winning the best take away category. I have been before but being such a brief experience some time ago I decided to give it another shot to refresh my memory. 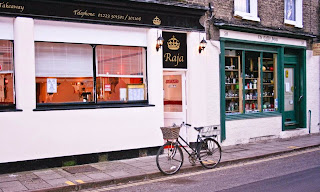 The place from the outside is small and easily missed on the busy road of King Street. One could be forgiven for walking right past it without noticing it at all. Once you are inside you realise that the place is not much bigger than it looks from the outside. That being said, they have very been smart with the space by laying things out in a certain way. They are still able to seat almost any amount of people in there if need be and they managed to fit our table of 10 very nicely, which is about as big a table as you may need.
The table is laid out with some nice metal candle containers and some decent cutlery, it all looks very smart and classy.
On inspecting the menu you notice that it is laid out really well, making it incredibly easy for people who are inexperienced with Indian food and spice levels to understand (or for people who just like a nice easy menu).
No accidentally ordering the wrong curry here my friends! 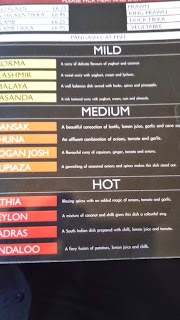 There is a reasonable selection of food on the menu, though nothing which will blow you away. You will not find the selection and cuisine choices of Lalbagh but you will still get most of the stuff you want from a text book Indian restaurant.

The beer on tap was Kingfisher – Though be careful as its well over £4 a pint!

They took our orders once everyone had arrived. The women taking the order was very polite and dressed in a traditional Indian sari. She was very sweet but really struggled to get basic orders right. Eventually after much discussion and repeating ourselves we got it all written down and our order was placed.
While we were waiting for our food we noticed that a lot of people were coming in and collecting take away’s. You could tell they were set up this way over dining in, which is probably why it has scored so well in the English Curry Awards.  It is clearly a very popular place for take away’s, which supports the claim to the award they won last year.
We ordered some pappadums, which were brought out with an unusual side. I was gutted to see the lime pickle was replaced by a red hot sauce, and though I enjoyed it, I felt like the hot sauce wasn’t complimenting the mango chutney, yoghurt or red onion salad like the lime pickle would, so though it was nice by its own merit, it didn’t work as well.
The portions were also stingy and we ran out incredibly quickly between the lot of us. In fact, they only gave us these four sides you see in the picture below between the entire group, so we had to ask for another. 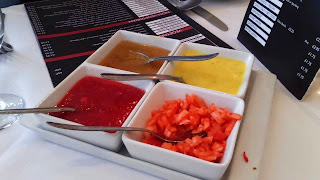 The food came out in average time, though one of our orders was wrong and sadly my friends mains was nearly forgotten completely… until it came out as I was finishing mine! All the food however was well presented and tasted great. Nothing at all was of poor quality and my duck tikka vindaloo was sensational! 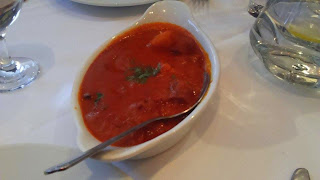 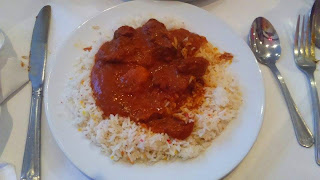 Curry and rice.
The duck tikka vindaloo blew me away, it was bold, full of flavour, smoky, and very hot. Everyone had a good laugh at my red face and hiccups while I was eating it, but that’s how it should be! There were no complaints from anyone else on the quality of their food. Full marks all around!
Once we were done we were presented with ‘After 8’ mints and microwaved hot towels. Just what I needed after that cruel mistress of a curry.
Everyone left feeling satisfied with their meal. 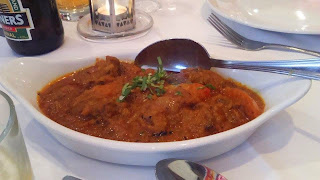 Lamb Rogan Josh.
There aren’t many decent Indian restaurants in the centre of Cambridge these days. They are mostly on the outskirts or in the surrounding villages. Its great to have a place of respectable quality where you can step out side after a good meal and hit the pubs immediately…which naturally we took advantage of!
From here the night gets a little hazy!
Conclusion:
The Raja seems to get the food right, even if they made a few mistakes placing and bringing out the order. The place is clearly very popular with take away’s in the city, as we saw with the countless amounts of take away bags being brought out during our stay. The place is small but is still able to cater for a decent amount of people as they are very good with organising their space.
The prices were all about average though they added a service charge on the bill, and pints were over £4, so watch out. Personally I think a service charge is something which has to be earned, not compulsory and I find it quite rude when restaurants do this.
Over all I quite liked the place, I cannot see myself coming back here too soon as I live in Ely and there are many better places between. Though for anyone living in the city this is clearly a place which lives up to its award for “Best For Take Away” and one of the finer places in central Cambridge.
My recommendation would be to still order take away from Royal Spice, Kismet or Cinnamon as they are still, in my opinion, the king’s of take away in Cambridge but you wont go wrong from ordering from the Raja. Just be careful when ordering over the phone!
7/10

A few comments from some of the others on The Raja –

“The Vindaloo had a good heat, a bit on the hotter side from my limited experience of vindaloos. There was a good flavour but it was a bit limited. Normally with a hotter curry you expect more flavour but this only had a middling strength of flavour. The Keema Nan was good but not great in flavour and all the Keema was gathered down in one end of the Nan. Generally good service. Apart from the Tikka Masala incident.”


“Raja really nice decor from the start I was unimpressed with there service bought one tray pickles out between us and we had to ask for more. They forgot two people dishes with their meals and one person was bought out when we nearly finished eating. We had to ask several times for the bill I think they are more better as at takeaway than a restaurant.”

“Upon walking into the Raja, I was impressed and thought the staff were very polite and welcoming, the restaurant itself had a good vibe to it. The food I thought was very well prepared, and had some brilliant flavours. My starter was a good portion size and arrived promptly, however my main dish along with a fellow curry crewer did seem to be missing when everybody else’s had already been served”.