Skip to content
I got a surprise phone call from my son yesterday begging me to take him out for a curry. Wiping away a tear from my eye, I realised that my son was going to turn out to be a little curry fiend like his dad, naturally, I couldn’t resist. 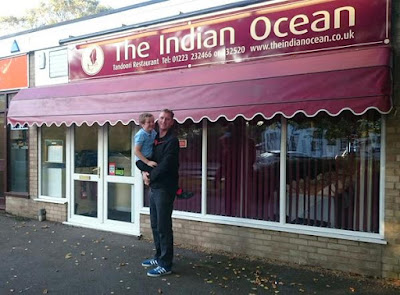 What better way for a father and son to bond than going out for a good old fashioned curry?
Tonight we decided to hit a place which I haven’t been too since before my son was even born. Yes, its been 5 years since my last visit to The Indian Ocean in Histon and its a place which I drive past nearly every day. The main reason for my late return is that it opens half hour later than its rivals (the Curry Palace in Cottenham and Bollywood Spice in Waterbeach) so when I have had the choice I haven’t really been willing to wait.
From the outside the restaurant is easy to miss hidden behind the Tesco on the main road. It comes across as a very small and basic looking establishment which doesn’t look very enticing. Upon entering I noticed the place has two double glazed doors which are quite close to each other which will no doubt make wheelchair access impossible…this was disappointing as I have a good friend who I like to dine with who just so happens to use a wheelchair. 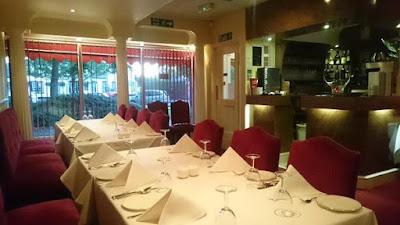 The staff were incredible warm and greeted us on entering. We were shown to our table and they placed napkins on our lap. The first thing I notice about The Indian Ocean is the white pillars located along the restaurant for that renaissance feel. I can see some people enjoying this touch and I can see others finding this a little tacky. 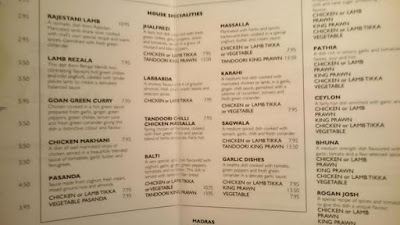 Looking at the menu I noticed that the prices were very reasonable with a basic curry for only £6.25.
Beer prices were quite respectable too, though we were limited to only Cobra beer on tap.
There was a small specials menu with nothing too experimental on there but it still had a good varied choice for the every day customer.
We ordered some drinks and papadums while we studied the menu for our mains. Joanna and Jack had an orange and pineapple juice while I had a pint of Cobra beer.
When they brought out the papadums they only came with three sides – mango chutney, onion salad and lime pickle. The portions were HUGE and were served in a convenient spinnable metal container which made sharing incredibly easy. The sauces taste great and went down well, though the lime pickle and onion salad were very poorly cut and quite chunky which made it hard to spread on the papadums. 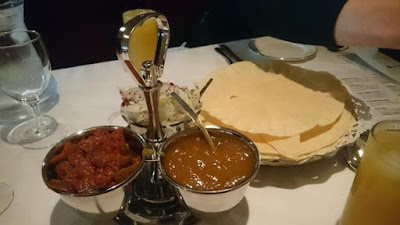 Lime pickle, mango chutney, onion salad with papadums.
Once we were done the staff came over, cleaned up and took our order. We decided to go for a chicken tikka biryani, a chicken tikka vindaloo, onion rice, a side vegetable curry, saag aloo and a peshwari naan.
The staff here were incredibly attentive and polite. They were friendly and very good with my son who was chatting their ear off the entire time. They even let him help with the clearing of the table which for some reason he found enjoyable. That being said, the place was very empty with only one other couple coming in to collect an order so we did get their entire attention, this might not be the case when it is busier. 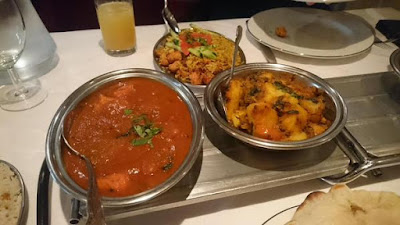 We were pleasantly surprised when our food came out. All our plates were laid out pre warmed and everything was presented extremely well in metal bowls. All portions looked very generous and the colour and texture of the food was very vivid and exciting. We all couldn’t wait to get stuck in! 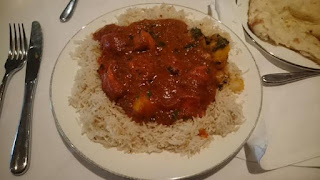 Chicken tikka vindaloo with onion rice.
Once I tucked in to my meal I was glad to see the vindaloo had that rich spicy taste i’ve come to expect, though I was disappointed to see that it was quite mild for a vindaloo. The chicken seemed to be tikka’d, and by tikka’d I mean it had holes in the chicken. I saw little sign of any the red colouring which was a bit disappointing.
The onion rice was a generous portion though the texture was a little dry. It tasted fine once it soaked up the the curry sauce which was the important thing.
Joanna and Jack both devoured their dishes. Joanna particularly enjoyed her chicken tikka biryani which looked absolutely fantastic from across the table. In fact, her tikka’d chicken looked really well done compared to mine. 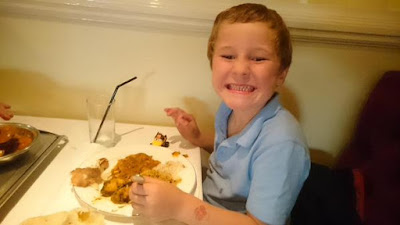 Smiles all round!
The peshwari naan was very decent. It was a good size and it had a generous amount of the sweet peshwari inside. My only criticism would be that it came out a little oily which then got on to all our hands. This with a 5 year old was a bit of a disaster!
The saag aloo was a generous portion (especially considering it was only a side portion for £3.50). It was large enough for all three of us to share with all our own dishes and it was prepared perfectly. The flavour, texture and colour of the dish was all absolutely spot on. Top marks here! 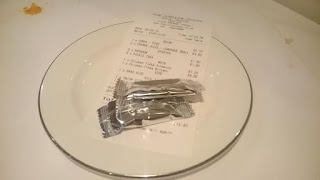 Chocolate and a respectable bill.
Once we were finished they were quick to clean up our table and ask us if we wanted a dessert menu. We politely declined and requested the bill which they handed to us with chocolates and a very basic wet wipe. I was a little underwhelmed by the wet wipes which were cheap, thin, and didn’t stay hot for very long.  The chocolates tasted great and the staff were kind enough to load Jack up with a handful extra despite the terrible mess he had left for them to clean up. Thank you guys! 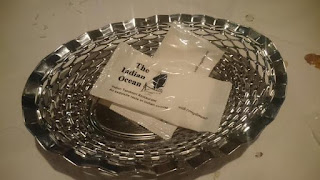 “Hot towels” (Wet wipes!)
The bill was very reasonable considering there were three of us dining. Granted, my son is only 5 but he eats as much as most adults I know, so it was still a pleasant surprise to see our total bill at exactly £40.
The staff walked us out the restaurant and shook our hands upon leaving. I have really enjoyed their formal and polite service which is something I have come to love and respect about Indian restaurants, yet is something I do not always see so much now days.
I look forward to visiting again soon, hopefully I wont wait another 5 years this time!
Conclusion:  The Indian Ocean provided a very friendly, professional and polite service tonight. The food is  good value and incredibly competitive though its probably not good enough to win any awards. The important thing to remember is all the food was prepared to a decent standard with generous portions, and with prices like a vindaloo for £6, what can you really complain about?
I assume The Indian Ocean serves the village of Histon very proudly and is popular with quite a few locals as the staff are incredibly approachable and friendly, though I cannot see myself recommending it to people from out of the area, especially since there is such stiff competition in the area.
The problem for me being that the place lacks that extra mile which most places are willing to offer now days. The interior is basic with a limited menu, the papadums only come with three side sauces, they only have one beer on tap, and the “hot towels” were very poor.
Sadly for people who are wheelchair bound the place is simply inaccessible all together. There is a double glazing frame along the bottom of the door which makes it almost impossible to get in, and even if you manage it there is an awkward two door system in the entrance which complicates things. There is also no disabled toilets, though someone in a smaller chair might be able to use their reasonably wide toilets (if they can get in the front door in the first place).
A  friendly, good value, reliable, text-book Indian restaurant. Just don’t expect all the bells and whistles of some of the other establishments in the area.