Since its opening I have heard nothing but good things from the Cambridge Foodies community about the Giggling Squid.

After taking over from the Jamie’s Italian chain which used to occupy the stunning Old Library building on Wheeler Street, the Giggling Squid has caused a huge stir on the foodie scene. Personally, I couldn’t be happier to see such a high quality Thai restaurant take over from another lackluster Italian.

Even though we weren’t seated in the gorgeous hall as i’d hoped, the room we were in was still beautifully decorated. I noticed there were a few floral seating areas for the love birds (keep that in mind for Valentines Day coming up). The interior was beautiful and decorated tastefully throughout the entire restaurant.

The menu is huge with a wide selection dishes to chose from. They have a particularly good selection of fish dishes for you pescatarian’s out there, as well as the classic Thai dishes we all know and love – such as Thai curry, stir fry, pad Thai, and noodles.

I was particularly charmed by the little stories behind each of the meals. Many of the dishes claim to have a connection to the restaurant owner or at least a dish which has some sort of significance to their culture. Either way, it was nice to have a meal which had a back story, whether or not it was true.

We struggled to read the menu as there was no lighting at our table. This did not appear to be an issue for other tables as they all had small lamps. I assumed that we were the odd table out, so this might not effect most visitors. With the use of our trusty mobile phones and their accompanying flash light, we were able to read the menu without too much trouble.

It was great to see a selection of decent beers relevant to the Asian theme of the restaurant. Cobra, Singha, and Chang were available. There was nothing on tap unfortunately but at least the Chang was served at in bottles at 620ml. 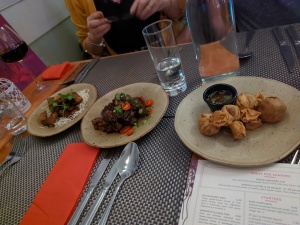 The entire menu can be found here. Reading it, you will see what a predicament we were in. There was just too much choice! We ended up having to order a selection of starters so we could explore the menu as much as we could while we were here.

For starters we ordered Golden Money Bags, Yummy Duck Spring Rolls, Mah Kwan Pork Belly, and Delicious Thai Chicken Wings. I thought this gave us a good idea of what the restaurant was about and had a diverse enough selection of varied things to test them on.

The Golden Money Bags were described as “Crispy, golden-brown, parcels of Thai-spiced chicken, herbs and vegetables. Dunk in homemade sweet chilli sauce. Happiness in a mouthful”.

I was not overly fond of these, though I never have been in the past either. ‘Happiness in a mouthful’ might have been a stretch. I would certainly say they were the best version of golden money bags I have had over the years but found them a little too crunchy, crumbly, and dry – even with the sauce! That said, my mum (who picked them) thought they were delicious! If you are a fan of these then you are going to love them, otherwise, I am not so sure.

The duck spring rolls were the star of the show for me and stood out as one of the most delicious things of the entire evening. So juicy and succulent. They really nailed the texture here too with a delightful succulent crunch. They were an absolute pleasure to eat and something I will certainly be ordering again in the future.

The Mah Kwan Pork Belly was an excellent example of what pork belly can be. Often, I find this to be a very underwhelming dish which (unsurprisingly) consists of a lot of fat and gristle. The Giggling Squid however managed to prepare this incredibly well.

Again, they not only managed to make it taste nice but made the texture compliment the dish perfectly. It really didn’t feel like I was chewing on a piece of fatty gristle but instead a really smooth piece of pork. It is executions like this which set The Giggling Squid apart from other standard Thai restaurants.

The sticky rice was served in a small weaved container, as is common during my time travelling across Thailand. This was inside a plastic bag which I had to open and squeeze onto my plate. Absolutely zero complaints from me here. I thought the portions were about right considering the size of the dish.

The Melting Hearts Chocolate Dessert was one of the best desserts I have had in a long time. It was a feast of different experiences in my mouth at the same time, with the cold vanilla ice cream melting on the warm chocolate body. As I put my spoon into the hard exterior it burst open with a gooey centre giving a contrast of texture. Texture being a constant theme of this restaurant. It is not just about taste but overall sensations as a whole.

The Giggling Squid is one of the top restaurants in Cambridge – It’s just that simple.

Finally, the Old Library has something worthy of its stunning architecture and prime location. Considering the quality, the food was incredibly good value. The place was absolutely rammed, yet the a service was still prompt and the food felt like it had real attention paid to it. This is something that a lot of large and busy restaurants cannot boast! Attention to little details, such as the back stories on the menu, the stunning interior, and a focus on texture as well as taste really set this place apart.

It is not often you have a community of 3000+ members have nothing bad to say about a place, and this is one of them.

I would love to hear your feedback on The Cambridge Foodies – Thanks for reading!